I know what you're thinking, this is not a Dark Angel Tactical Squad... ahh, the best laid plans of Gaunts and Rippers... so I write my confession, plan ahead for what I'm going to do next and then immediately go for the thing I wasn't going to do. But when the muse is upon you it's always best to go with the flow. So I just decided to do this because even if I pause halfway through the sculpting there's stuff done when I was compelled to do it. 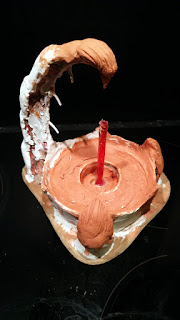 That said I may have rushed some bits and the focus spine isn't too pretty but I think the painting will hide a multitude of sins.

The ectra chitin plates came out really well though. I'm sure I'm missing something in the technique from the Capillary Towers and the Bastion as it feels too easy. Maybe that's just the familiarity of the process I don't know but it was so easy it felt like I'd missed off part of the process or the previous sculpts were harder.

I also cut and gouged the foamboard battlement 'rooftop' and in so doing sliced through the bottome board. So I applied a thin coat of clay, to stabilise it and create a more rigid platform to apply whatever sculpt the Hive Mind sends me. This process was actually the first thing I did and potentially killed the nights efforts altogether, that said it was about 45 minutes to an hours work to do this.

The following night I ummed and ahhed about continuing down this path but it means I can work indoors and I do my bit, pack up and go to bed earlier - I managed pre-midnight both nights and perhaps with a bit of effort I can manage 11 o'clock! 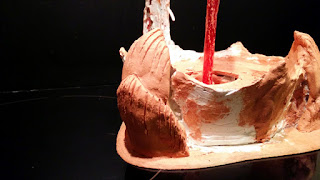 So the two smaller plates were completed,

and the second spinal plate. I'm trying to bulk it out, because I thought the spine looked a little anaemic and hopefully the more clay I use the more durable it'll be. 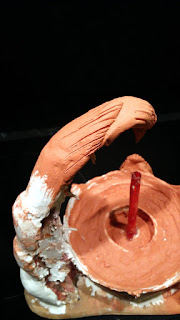 I'm taking it slowly, so I don't smoosh up what I've already achieved, another 45-60 minutes and it's left to dry overnight. With four plates left to do I will probably continue on this for most of the week and get as much done as I can. Then hopefully I can start back in earnest on the Tactical Squad, like I promised. I can foresee getting this to basing/undercoating stage and then putting it on hold as painting it will take a fair amount to do and I'm far more interested in my other tasks being completed, even if this has just jumped the queue spectacularly.