I could be showing you pictures of my updated Cerastus but I'm pretty sure you just want to see a Tyranid Void Shield Generator right now, am I right? Or am I right? Here's the base, another spare piece of hardboard, this time from an old TV cabinet. I'm rapidly running out of these spare bits, I might actually have to buy some MDF soon. I scored through the template with a knife so I'll know roughly where each piece goes when I come to stick it on. 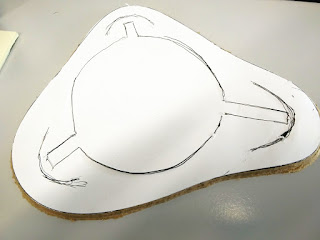 I've trimmed the noodle bowl, it would later transpire trimmed too much but  nevermind. 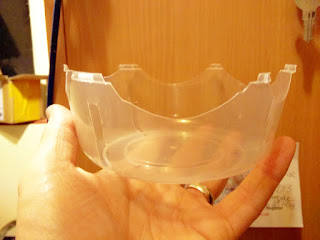 And the bowl in place, although the numbers don't match up. I then realised I would need to fill the hole in the ring, preferably before I glued the ring in place. Initially I thought I'd fill it with newspaper but then remembered I had a load of high density foam in the garage from my brother's vivarium. And amzingly there was a circular core cut to form a ventilation hole in the viv. This was a perfect fit and I hollowed out the inside a bit to better form the 'trumpet' shape at the base of the VSG emitter. 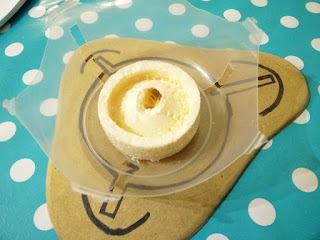 And a lot of hot melt glue later and we have the basing structure, with a mechanical pencil tube for the emitter support. 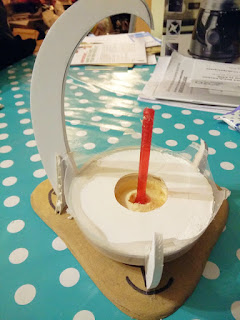 I screwed up a bit on the floor, it's slightly tilted and even worse tilted up against a wall that was cut too deep but hopefully the sculpting on top will fix that, not that it matters as anything on the battlements gets a save, regardless of how much the walls obscure it. 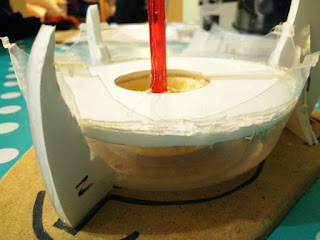 Next step is to fill out the chitin spines with tissue and PVA and then make the chitin spines. This step and all subsequent steps are all things that require me to sacrifice Dark Angels time though, even this step was one too far, we'll see what price I'm prepared to pay...