Steady progress once again, there's not much to show really but the Bonewhite is a biggy and it's quite time consuming. These six were the stragglers, the remainder that just had some quick elements, like the tail and and arm here and there highlighted. 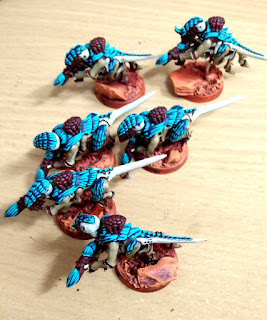 These are the seven I painted through to completion of this stage. I also did the wraithbone chips, I'd say to speed thing up down the line but doing it now or later will take the same amount of time. But it's all about the mind games and getting them done now feels like I have one less thing do making the process near completion 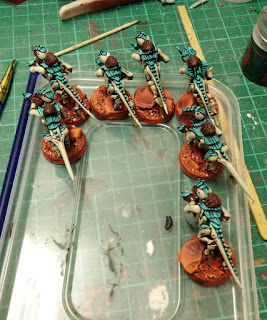 So the remaining six to do and then it's second highlights. I'm pretty confident these will be completed in time for Throne of Skulls even if their purpose is no longer relevant. I still can't decide what to take, I am however mulling over the inclusion of my Genestealer Cultists for a number of reasons - the first and second gen rules gives me 12 relatively cheap obsec units and I get to field them and they're cool - all the big kids are talking about Genecult.

I can run my Spawn of Cryptus as a Patriarch, he's quite expensive but could be really interesting in play. Additionally I can throw in a couple of broods of purestrains as those twins might be handy just knocking about to counter attack, hold the line, or score objectives - although as they're Elites that's not as effective as they could be. I'd have taken the Broodkin Formation just for giggles but as I don't have the third and fourth gen models [though the plain cultists might have sufficed, though I don't have enough], abberants or familiars it wasn't possible.

Either way it;s quite stressful not having this list done...
Posted by 40kaddict at 12:59