Afternoon #warmongers and #warhammercommunity a wise man once said "'cause you come from out of nowhere, oh, oh" and I've been #paintingwarhammer my #Nurgle #BloodBowl Rotspawn which has done just that. Having built the thing I primed it Army Painter Bonewhite [not forgettign a warm soapy bath beforehand - Nurgle really appreciates the cleanlines before it gerts dirty, dirty, dirty]. 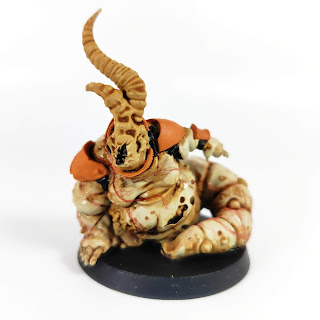 Ok, lets address the Rotspawn in the the room - veins. I once saw an episode of How Do They Do That, which featured artificial eyes and one of the tricks they do to make them realistic is they embed red woollen fibres under some gloss varnish to represent veins. I think they also draw some on but that stuck with me and I wanted to do the same. 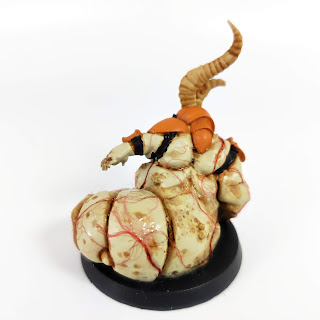 Now the only red wool I had was really bright so I added some sepia wash to get some variation and then applied it with some Lahmian Medium to try and bind the fibres on. Overall it wasn't bad, but I really shouldn't have deviated from the recipe of gloss varnish. Gloss is thicker and would have provided a smoother transition between flesh and vein. As it was the Lahmian Mediaum left the fibres very much on top of the skin instead of embedded in it. Also, I did pause between applications and that meant some of the sepia washed fibres dried and became difficult to mould to the form below - lessons learned. 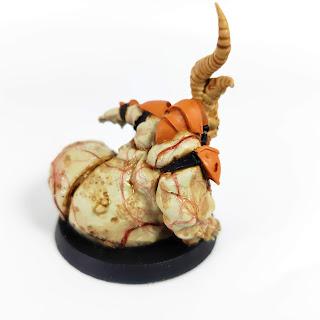 I obviously wanted a pale grub but with some underpainting going on. So, rather than go in with the Bonewhite highlights after some shading I went straight to my Miniature Paints Cream. The only problem with that is even thinned down it's still quite opaque. 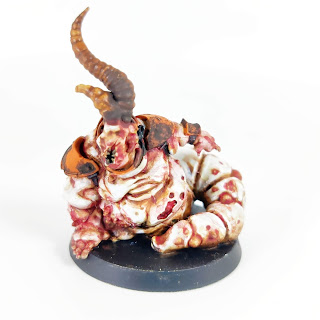 VGC Heavy Red [Khorne Red] again comes to my rescue to add that angry rawness to the skin. 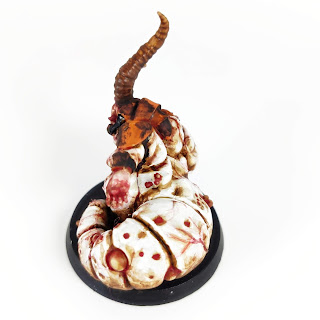 I also added some shading to his horns, although I get the impression from the painted box art they might be tentacles, he at least has that mutation in his stats. Anyway, I'm doing horns. I also added Burnt Umber shading on the lower part of the model and Typhus Corrosion to the armour plates. 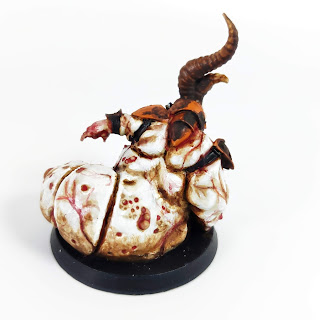 I'm already surprised how quickly this is coming together, I guess in no small part because it is just a big maggot with a couple of orange armour plates and horns - there aren't too many colours to contend with. 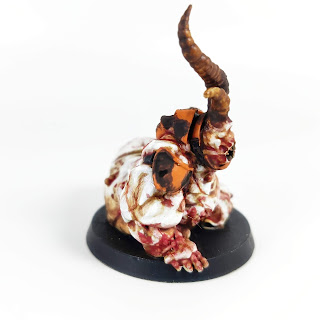 The face is starting to reconcile itself, it's almost just like a Lamprey. I do still wish there was an alternative head to go on it but it's not quite as bad as I feared. 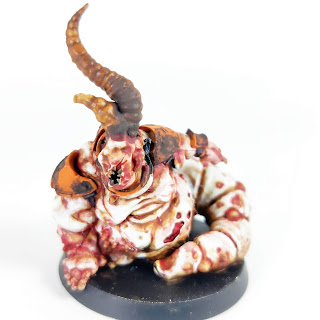 Here's where the choice of Lahmian Medium as a binder for the wool fibres rears its ugly head. You can even see in some cases the fibres have broken loose and I'll have to 'surgically' remove them. Frustrating because the process is sound, I just executed poorly, but it was a first attempt and we live and learn. 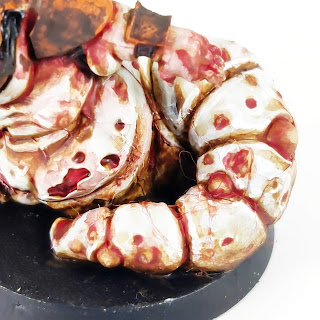 I tried to paint over some of the veins to help embed them under the skin. I think that lack of a gloss finish made them even more pronounced so I think a gloss varnish now might help. It could be closing the stable door aft the horses have bolted but it's the best option I have right now to try and smooth things out. 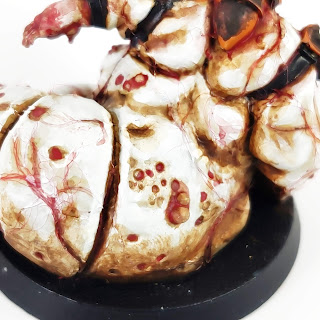 Here we have it glossed up with some more progress on the model - oranges and yellow pustules. 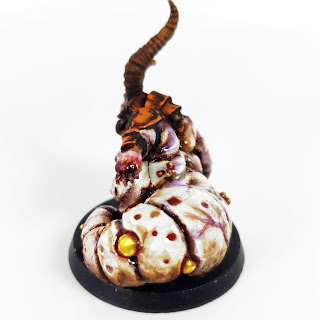 It's improving and with the bits of purple and red there are all kinds of mottled skin effects going on. I know it could have been even better but I still think this is beyond what I was expecting to achieve. 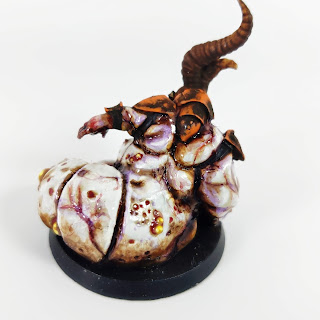 The gloss coat on everything has gone some way to embed the veins a bit. It's not perfect but better than it was. I just can't believe how quickly it has all come together. Admittedly it is still a distraction from my Aegis Defence Line and Aberrants but it would have sat on a shelf for so long if I hadn't just gone with the flow. 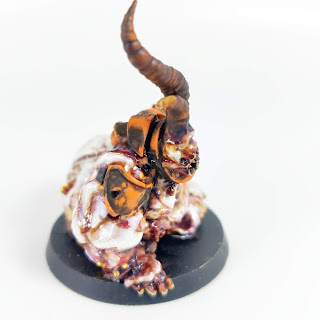 The face is a mess, literally and figuratively. I'm not sure if it's better or worse but I'll keep plugging away at it 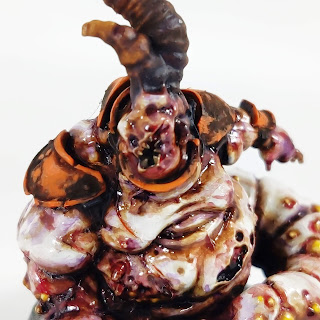 So far it is definitely the most disgusting player I have on the team and although it's not perfect it's definitely an improvement. When I come to do my Death Guard Kill Team I'll be using this as my template, that for certain.
Posted by 40kaddict at 12:00 No comments: 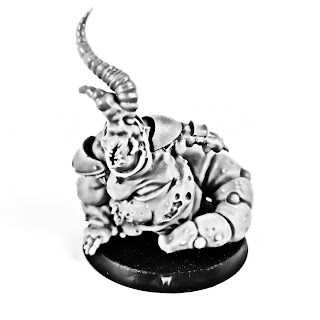 Afternoon #warmongers and #warhammercommunity I've been to #Warhammer World and as there was a Forgeworld model for #BloodBowl that I needed for my Nurgle team I thought I'd treat myself. It's is a bittersweat treat though. I like the model, a bit. It's painted amazingly but the head is a bit meh! 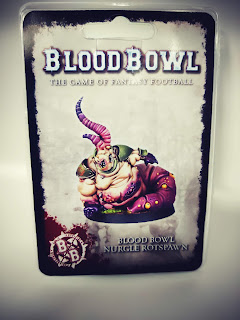 Really, this could have come with a 2nd head option, in case you wanted an alternative. Unfortunately though it's not a particularly impressive model. 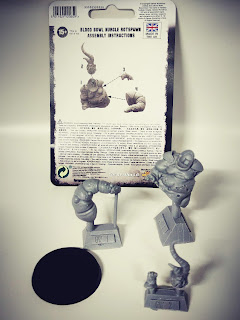 For £21 there's not much to it. In fact I put it next to a Battle for Macragge Space Marine and it's only the horns that make it bigger. 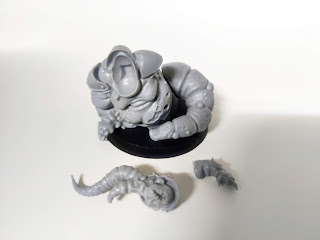 I mean it's reasonable enough as a figure but this should be no more than £16 in my book. Then again plastic Genestealer HQs can cost £17.50, so maybe it is a fair price. I just feel I could have done better. I did want one of the Gellerpox Infected from Kill Team Rogue Trader, or even convert a Nurgle Rot Fly, which would have been significantly more impressive. Ultimately I just opted for the easiest solution and now I have to live with it. Remember when I said I wouldn't be buying any more models for the remainder of the year? That was March! So much for promises...

The plan is to treat it as a Witchetty Grub - it's body will be cream, as I can't get that colour on it any other way. Usually the the team colours had cream for the trousers, but it has none. I want it to be the most disgusting player in my team - bring it on. For now - my Great Big Granite Big Build Great Big Build Stamp of Approval. And it also got primed with Army Painter Bonewhite and based, so it gets the Big Build Great Big Granite Base Stamp of Approval too. 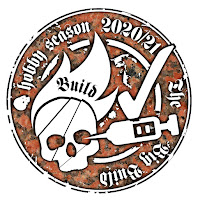 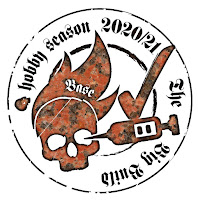 Afternoon #warmongers and #warhammercommunity I've been to #WarhammerWorld and in the process took a lot of pics and somehow had a lot of Middle Earth ones. These were mainly for my mate Otty who has been churning out Rohirrim all over lockdwon. We're also playing Middle Earth Role Playing game so maybe it's subliminal - anyway a hobbit hole, is it Bilbo's? The Battle of Pelennor Fields.

In MERP I just killed one of those Fellbeasts - 1 shot! I mean we had stumbled across a specific Fellbeast slaying arrow in a previous side mission but I got a critical damage role of 93 and slaughtered it. Next shot was the wizard's apprentice - damage 100! I scored over 4000 experience in one session! 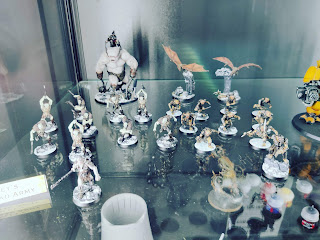 Ashley's Scouring of the Shire.

And there we have it. I made a purchase while I was there, can't decide if I was a 'fool of a Took' for doing so but nevermind.
Posted by 40kaddict at 12:02 No comments:

Afternoon #warmongers and #warhammercommunity I've been to #WarhammerWorld. This was Monday last week and my son returned to universtiy in Oxford [yes, I'm never going to stop reminding folk my son goes to flipping Oxford University!] Anyway, it should have been drop off and straight back but I got embroiled in a scavenger hunt competition, whereby I had to detour to Nottingham to take a picture outside Nottingham Rock City, holding a book about my favourite band Pitchshifter and I'd win ruddy great big red skull for trouble!

As I was in the area and Warhammer World was on the way back it was rude not to pop in. Obviously I also took a few pictures so folk can see what's on display at the moment.

This battle scene was pretty epic with the railway sidings and the impressive octagonal tower.

Nice use of a Munitorum Container cut in half to make a rail transporter. 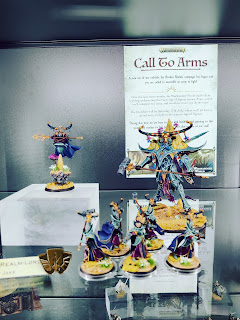 Pretty impressive Imperial Fists Redemptore Dreadnought. Liam is going Imperial Fists and has just done one of these. He hasn;t blogged in a while but I will guilt trip him into sharing on http://bluewarpstudios.blogspot.com 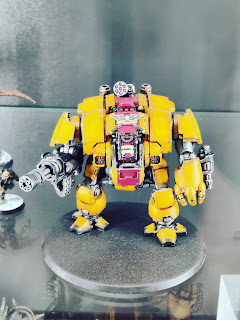 A crazy collection of Knights, with some very cool conversions.

Sisters, doing it for themselves!

A tweaked House Taranis scheme - blue instead of red.

Aeldari on dinosaurs, with guns!

Ogres and a BIG dragon.

I;ve a second load of pics that are all specifically Middle Earth related coming next.
Posted by 40kaddict at 12:05 2 comments: