Bless me readers for I have sinned, it's been over a couple of months since my last confession. Throne of Skulls is round the corner so what's next?

Historically any kind of big hobby weekend leads to a drop off in activity, sated like Mr Creososte I don't do much afterwards and with the Termagants reaching completion it doesn't help to have finished a project. Luckily I've a number in progress that can be picked up:
Funnily enough the Tactical Squad is coming out as a fore-runner formy attention. I'm actually playing with them and I don't like that they're incomplete. They shouldn;t take too long to finish off - I'm at second highlight stage which could be done in 3-4 days at the most and then it's the fun bits - picking out the details, chapter marking and symbols and all the litany scripts. 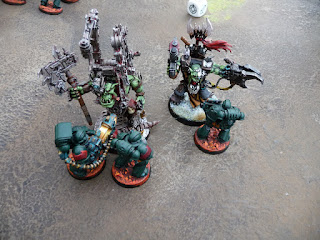 They're also easier than the Ravenwing which are mired in doubts about the colours. Well they're not really, everyone's been super supportive so I just need to bite the bullet and get on with them but the pause has let doubt seep in. So:
Are my priorities with the Genestealers plodding along beside them just because it helps reduce the tedium of that task. As for the VSG... well we'll have to see. The sculpting process is a bit daunting, not for reasons of difficulty it's just getting everything together and I have a mental picture of the last time I did the sculpting - in the kitchen, and I kind of feel the need to replicate those conditions. Anyway, if I manage to crack on with those three tasks I may build up the motivaiton to attempt the VSG because it's going to be 5 or 6 sessions of work and I have to juggle how that's going to pan out.
Posted by 40kaddict at 12:12