I really didn't expect to do an update so soon but it turns out this bit was quite quick to do. The noodle pot handily has six little support struts underneath the rim. Although the VSG will only have 3 chitinous elements the battlements will have six peaks in it's construction, as per the concept. So I've cut into the pot at three areas, using the struts as a guide. 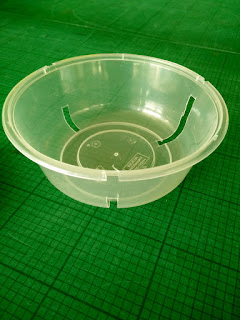 Here's a look at the rough templates for the spines. The main focusing spine and a variety of little chitin nodes for the other positions, so I can pick and choose the most appropriate. Also the other piece will be the template for the base. A small building in 40k is no bigger than 6"x6" square [or equivalent 36 square inches] the base will be 35 square inches according to my area measurement tool. So unlike the crater base on my Bastion, which is not affording cover or difficult terrain this potentially could but probably would be too impractical to walk through. Bottom line the base is smaller than a small building the actual VSG is therefore considerably smaller so no one should be able to complain about modelling for advantage. 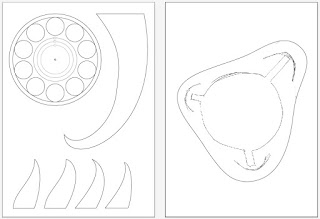 I've freehand cut various notches and trimmed in places to fit the bowl. I'm pretty sure the templates will come as is when I do them, because if you do fancy making them you're going to have to trim to fit the way you want just as I've done, there's no accuracy in this. 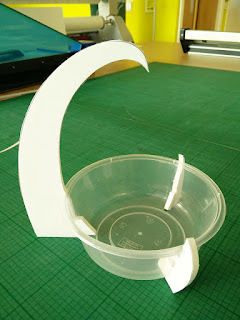 I have decided that the large spine is a little too fat though, I'll be trimming a centimetre off the back so I've got more space on the base. And the battlements are in place too, now to make the base. 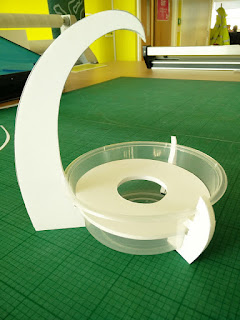 I recently got into a debate on facebook regarding the battlements, the VSG is classed as an 'Impassable Building' which rules state you cannot enter the building but specifically states you can use the battlements. Having played Ben with his VSG we'd always played that you could climb up the outside. In this discussion someone was suggesting if they could model ladders on it and it was pointed out this is 'modelling for advantage' which I though was tosh as most ruins we can climb up only require a 3" difficult terrain test regardless of any modelled ladders or ropes. I even found reference to battlements being considered the same as the top level of a ruin. However, I was deemed to be interpreting things wrong that the building was Impassable Terrain which does not allow anyone to pass over, or through, unless they have the ability to do so - Jump, Skimmers etc. To which I disagreed as it was quite clear under the terrain rules that as a Building 'they have their own set of specific rules featured in their own section'. But it was argued that building were mentioned in the terrain rule and therefore subject to the terrain rules. I tried to just end things by saying people interpret them in different ways but my adversary had to have the last word along the lines of 'yes, his way which was correct and my way which was wrong'.

Bottom line I see the VSG as an enclosed box, you are not able to enter it to take advantage of any 'transport' protection abilities but it does have a Battlements you can access by climbing up the outside. The idea that you can also not pass over it because it has the word impassable and another different piece of terrain also has the same word in it, does that mean Impassable Terrain is also subject to the rules of an Impassable Building...