With these scratchbuilds there are a number of elements that I would consider 'obstacle to progress' but in reality are actually quite simple tasks that only require an evenings effort to achieve. As such that should be quite rewarding - I fill all the plastic out with PVA's tissue paper and by the end of the night the job is done the next part begins and I should be happy. 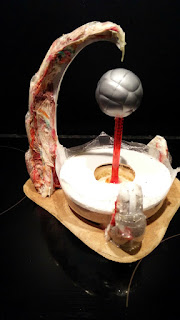 Unfortunately I have to get through the tissue and PVA process, which is yucky and I don't like it so it becomes a hurdle but in this case I was still motivated from overcoming the chitin plate obstacle and hopefully the momentum will carry me through the icing and sculpting stage too. As you can see I was a little creative with the tissue, using an old brush cleaning paper towel that really was only good for the bin but I've been using it for so long I thought it better to enshrine it within the structure.

I did use a load of tissues that came from a coffee shop which mashed up much better in the water and PVA. I guess there really is a difference between tissue and paper towel consistency [I know how obvious that sounds, but it's worth noting]. 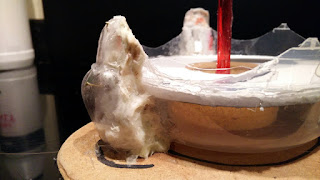 You can really see the difference on the other side of the spine, this has become more like papier mâché than glued paper. I'm going to be covering it all up anyway so it doesn't matter but if your sculpting skill aren't great that's two different option of how to detail your model. The paper towels make an effective musculature, I'm sure with a few successive coats of PVA you could easily just paint it red, cover it in Tamiya Clear Red X-27 and it'd look awesomely disgusting. Alternatively the tissue makes a different, more mineral looking finish that could be equally effective.

The smaller supports will also have fleshy joins to the main battlements. This is something I considered on the Bastion but never did, having the bone walls join directly to the Chitin towers, but for this I'm going to have exposed flesh between the armour plates and the walls.

And just because here's a close up of the paper towels, that really looks like some fibrous meaty musculature. You probably could even get away with not painting it, it's already got some crazy colours going on.

And again at this point I'm wondering should I have prepared the second one...? Next up - lets ice this sucker!