Scott was my last game of Saturday and I had to ask him to repeat his army list when he said 80 scouts! Yep, 80 Scouts, with sniper rifles, some with Flakk, a Terminator Librarian and Knight Warden with Icarus Autocannons.


The low down:
I set up first, although with 80 scouts infiltrating it didn't take long for Scott to put down his Knight and Librarian. I then won the deployment to Infiltrate and positioned the Genestealers in such a way to make his Scout deployment a bit of a nightmare. Ultimately this would prove more a hindrance for me nut we'll get to that later. 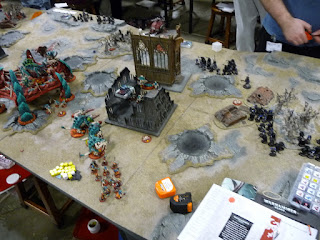 I wanted to see off the Knight as a priority, so grouped the Carnifex together to make use of the central ruins, backed up by the Zoanthrope for synapse, supported by the Hive Guard and the Broodkin. I'd had a situation with Synapse last time so I didn't want the same issue. 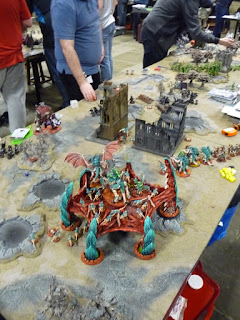 At first glance I was OK withthese cards, I had the Horror on both the Flyrant and the Broodlord, shooting a unit was inevitable, only objective six seemed out of reach, being deep in Scott's DZ, surrounded by Scouts. 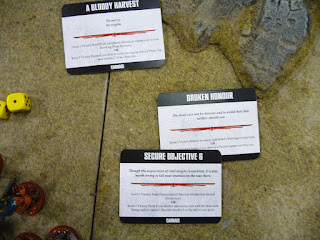 I swooped the Flyrant forward first turn, got Catalyst off and the Horror but the Scouts made their Leadership. The Broodlord's attempt was equally fruitless. I did manage to put a couple of wounds on the Knight though. 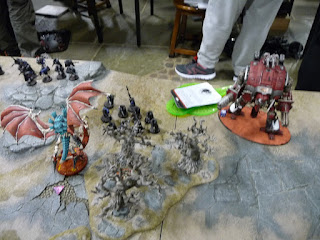 The Broodlord occupied the top of the far ruins with the Carnifex and Hive Guard advancing through the central one. I foolishly forgot to run the Broodkin to keep up. 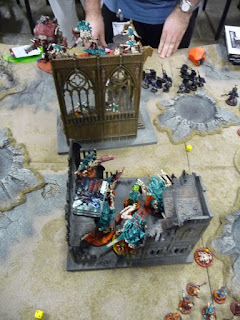 The Knight advanced on the 9 Termagants spawned in my turn. 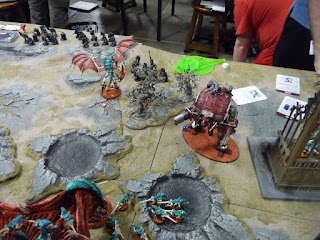 The weight of sniper fire managed to bring one of the Carnifex down, he may also have been hit by Psychic Shriek from the Librarian. This gave Scott First Blood, he also scored another 2 VPs, probably from killing a unit. He also destroyed the Purestrains, who's infiltrated in Scott's far corner, just to annoy. I must stop doing that it never ends well and is ultimately pointless. 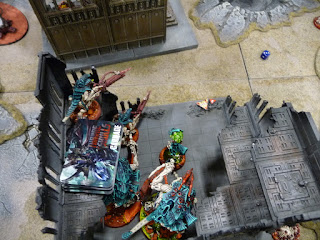 The Zoanthrope perils while trying to get Warp Blast off, he dies again for his efforts 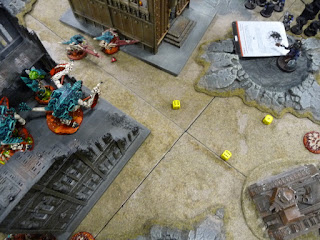 and again shoots the moon before hitting the intended target! 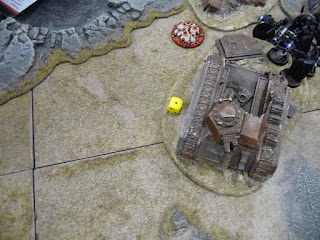 The Horror fails to cause a pinning test, this time failing to manifest enough successful Warp Charge to cast the power. In frustration the Genestealers assault the Knight [which may have taken some more damage of the Flyrant] 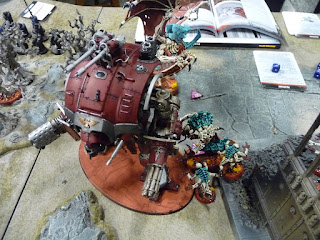 The Rage attacks manage to destroy the Knight, but still no VPs as I'm scoring only in the shooting phase. It was about now that we both realised that unlike the last game you can actually discard objectives in this mission, although to be fair my cards were still achievable. 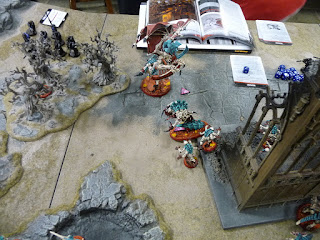 The Knight scattered into the crater. 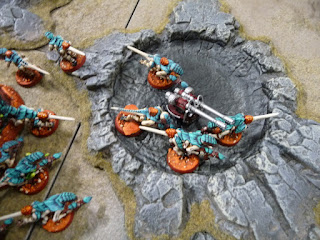 It exploded, wiped out a lot of the newly spawned 16 gaunts 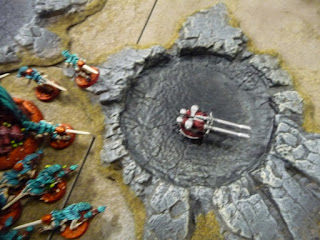 and took out some of the Genestealers too, leaving the Broodlord with just two bodyguards. 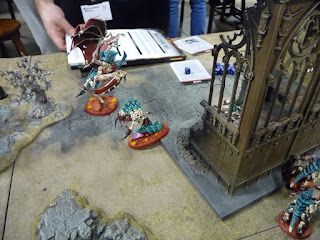 The Stealers consolidated back into the Ruins. 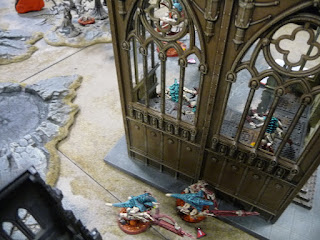 Meanwhile, on the next table Otty was facing down Tau 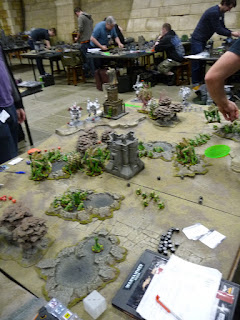 With a pretty epic swarm heading to the gunline. 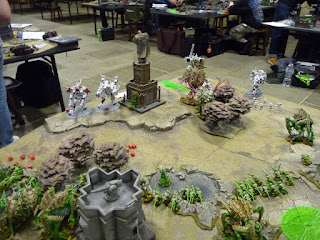 Scott managed to score Objective 3 in his Turn 2 for his 4th VP, I hadn't even got off the starting blocks with these damn cards. The Tyrannocyte arrives from reserve, hoping to score objective 6, but deviates back onto some Scouts. Luckily it goes into ongoing reserve. 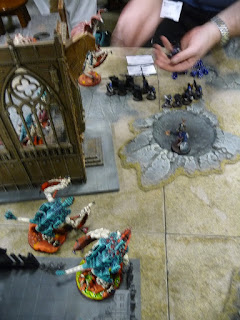 Genestealers and the Flyrant try to get the Scouts pinned, but fail yet again. The Stealers assault Scouts 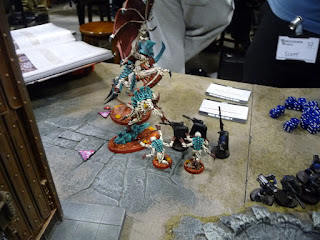 But they prove beyond them when an Imperial Knight was not. 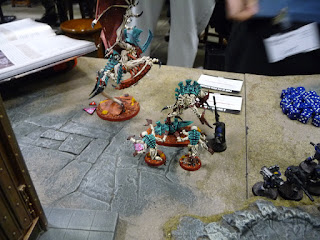 Scott manages to kill the second Carnifex for another VP and sent Scouts to support the last man standing against the Genestealers, 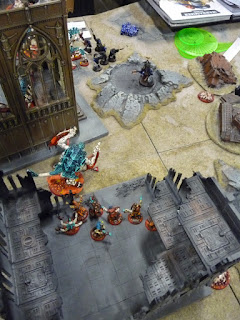 The last Carnifex falls to Sniper Fire and most of the Broodkin fall foul too. 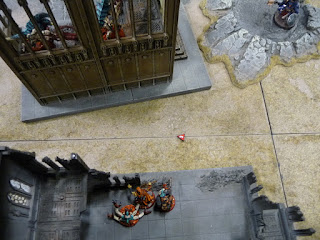 The Scouts prove an effective tarpit on the Stealers and I still can kill enough of them to break free [bring on hit and run!]. 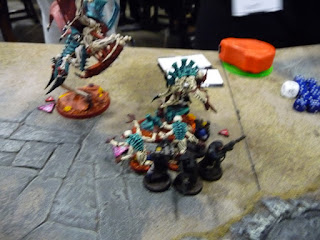 My Turn 4, the Tyrannocyte arrives from reserve, the Rippers manage to get to Objective 6. The Flyrant Vector Struck the Librarian, taking his last wound off him, so much for Terminator armour and securing Slay the Warlord. The Psychic Phase and I need a rules check - the Horror is a Malediction that causes a Pinning check. You can cast those in Assault and on those in Assault. It causes the victim to go to ground, but there doesn't seem to be any information if that is possible or not when in combat. The end ruling was I managed to cast the Power and the unit was pinned, but can't go to ground. That got me a VP, if the Stealers can kill the Scouts then I get 2. Unfortunately they do neither and they then pass a morale check and Scott points out that there were two units of Scouts there anyway 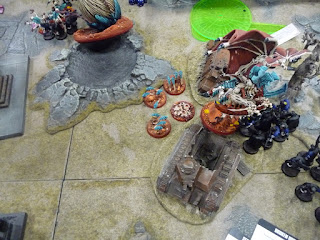 The game comes to an end at the close of turn 4, the events team said we could play on but Scott was happy to end it there. I'd scored 4 VPs to his 5. Carnage points I'd picked up 46 and lost 71. I have to admit I'd been frustrated in this game, the cards had proved elusive, they were all easily achieved but I just couldn't seem to get them. Additionally because I'd forced his Infiltration to be spread out I ended up in a situation where I couldn't actually target things I needed to do to get VPs.

I'd also failed to use my Broodkin, forgetting to move them up quicker and I'd thrown away my Purestrains for nothing. I'm sure with another couple of turns I could have tipped the balance, even managed to get more Carnage points but it wasn't to be. I also killed another Knight, which was pretty cool, although I didn't get any points for it :( Anyway, two loses and a draw, what can I do on day 2?
Posted by 40kaddict at 12:13