I just worked out I've written 116 Battle reports over the course of this blog and although I'm really pleased about the result I am questioning how worthwhile Battle Reports are. They take a really long time to write and not an inconsiderable time to read either. I try to be brief but it never happens - the amount of pictures dictate this alongside those events that actually require more in depth coverage. 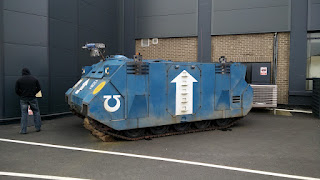 I wonder if my efforts are better spent elsewhere? The pictures were much better than usual though this time so even if folk don't read everything there's plenty to look at. Bottom line is if I'm ultimately doing this as a record of my games is it worth it? And if anyone else reads them that's just a bonus... 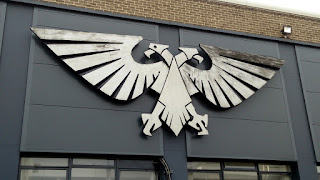 But that's just an observation post Thrones, I know it appears a little down but the actual event was great and the weekend away was so much fun. Not having been for two years, when Escalation had only just been introduced it was interesting to see how to open army choices faired and it did raise the issue of 'best game votes' in potentially a more favorable light. It was clear from Scott winning that his 4 favourite game votes were the deciding factor, this fits with the organisers view that it's not the winning that's important. Now I know this arbitrary measure is an issue with some people but I actually think it works now. When you open up the amry choices to abuse, with all kinds of beardy, spamalot, cheese-fests then win at all costs becomes inevitable. BUt if it's at the cost of someone having a rubbish game, then how do you prevent that?

Well if you're going to slaughter everyone you face then you have to find a way to do it with a smile and personality that will win over your victim. Alternatively you can bring a sensible list win some games but also behave in a way that's going to win friends. Now I only got the one best game vote and from experience I can see that that's often your last game, it's the most fresh in your mind things are usually relaxed and the event is winding down. I understand how Scott got four, he's sucvh a fun guy to hang with but it can be a fickle decision so on the one hand it's something definitely out of your control, I mean I'm a nice guy, people like my army, I have fun when I game and play cinematically above competitively. I bring sweets and free wound markers, they're marketing tools as well as bribes ;) but that's no guarantee either way But it's definitely a tournament leveller, it means those WAAC lists don't dominate. 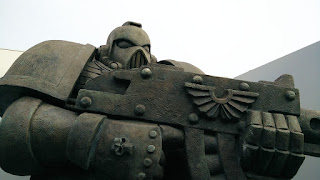 So however frustrating it can be, and I've looking at the score sheet and how I faired over the weekend against Scott with the scouts from my third game. He scored 233 Carnage points and 49 VPs over the weekend. In comparison I did 215 and 42 VPs. Our positions were vastly different though as I got a favourite game vote meaning I finished 61st and he finished 96th. Game wise though his force was more successful. That obviously doesn;t sound right but I guess it's not how you win but how you play that counts. Incidentally that's why they no longer have a list of Best Army and Favorite Player plaques in Bugman's, because it's not about winning.

So although I get why this mechanic has issues I think on balance it's probably for the best. You can't have total freedom in army choice without something to balance it out. As for the rest of the event I was a little disappointed about the limitations for display of best army, I hope that's just a temporary thing. I;ve seen more nominations in recent events so three seemed a little harsh. I definitely thought Liam deserved a shot, every time he;s been he's taken a different army painted, converted and scratchbuilt in places to amazing standards. Honorable mention is nice but I thought it deserved more. 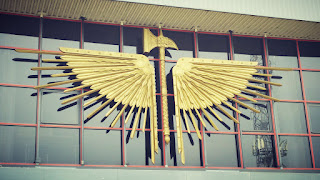 Given the new shops I was actually surprsed the venue still felt so big, there's far more room than I gave it credit for, which was a relief. 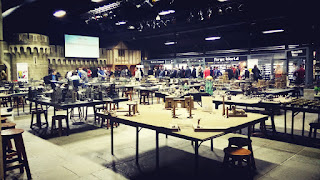 My only other issues - the food wasn't quite as good as previous years. It all looked freshly prepared on site, I had a burger and I'm sure it was 'scratchbuilt' but the actual patty wasn't great. Unfortunately the other options didn't appeal to my delicate stomach. I'm sure a lot of efffort was put in it just wasn't up to the standard of previous trips. 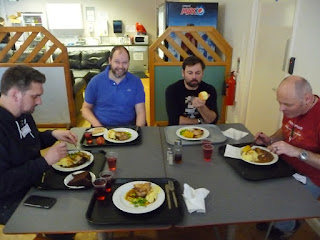 We were also a little disappointed to discover that the exhibition is not included in your ticket price. Now folk said the £7.50 was worth it but given the only free time to look at it was after the event there was no way I was going to fork out for it and have to rush through. I'm sure pictures don't do it justice but having not experienced it in the flesh I honestly can say the pictures work fine for me right now. 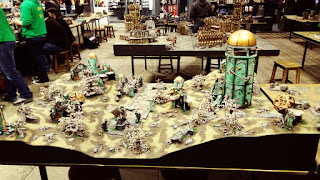 However, this Age of Sigmar table was awesome and goes some way to get an additional hobby fix without going to the exhibition, rushing round and failing to get my money's worth

I loved this table, the colours and the extra details made it really good. I was little disappointed about the early closing though. I'm surprised they shut at 8, although Wednesday it's 9 and the remainder of the week its 6pm! I think they're missing a trick but then they know they're customers/business model. 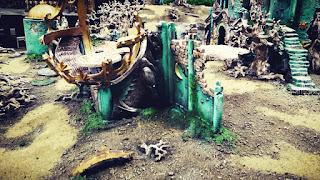 All that said we came away with renewed faith in the events held there. The events team put in a lot of effort and despite the time since our last visit they were extremely helpful, supportive and friendly. I even got name checked during the awards ceremony thanks to my repeated failing in being able to do simple mathematics on my scroing sheets. 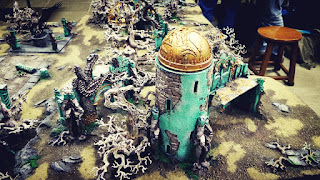 Not to mention the playful banter the staff had at my expense for my army lists that had hole punches a few millimetres offset from their intended positions. I can't thank them enough for their patience and hospitality, they make the evnt special, of course so did the beer and the company of my gaming buddies too.

It was a great weekend and we'll be back again