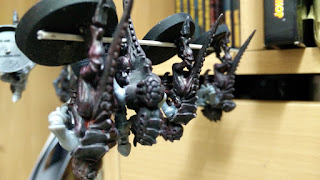 These were from an old ebay auction, where I picked up a load of Hormagaunts that I was going to kitbash into Termagants. They're all going to have Adrenal glands on their backs so they can join the other 20 Adrenal gaunts so I have two distinct groups of 30. Of course I have just this second realised the plan was not to have two Tervigon tax broods but I've started it now and they always needed doing. Having chopped off the SyTals the Fleshborers were a little fussy to glue back in place with out their ball and socket joint, hence why they're upside down as it helped them to glue in a better position. What's also unclear is that there aren't 10, erm there are 13... I had 8 Hormagaunts, one of which was headless so I used a Genestealer head and I also had 5 normal Termagants so why not do the lot?

The excitement for this is much like the decision to advance Old One Eye to the top of the queue for the last Blog Wars, only not to use him. But with a deadline, and now something to complete it by, it's definitely a Catalyst for sustained effort and progress [there goes any chance of an early night!]. 4 weeks is quite a stretch for me I think to get all these done. To speed up the process I've got the Army Painter Skeleton Bone Primer and will be prepping the Deathwing Knights simultaneously to at least keep progressing something Dark Angel.

1 Bastion
1 Quad Gun
1 Aegis Defence Line
1 Skyshield landing pad
[So I can run an ‘Imperial’ Strongpoint, which is a lot of points but showcases the scratchbuilt Fortifications]