I popped into the shed with my Void Shield Generator with every intention of 'icing' it with tile adhesive only to find all of it had dried out. With all my projects staring at me with dead soulless eyes I promptly ignored them all and went completely off list. I mean there are no Deathwing Knights on my To Do List whatsoever, I suppose I could justify them as part of 1,850 functioning army but I'm reaching. Bottom line all that expansion box needs to be done, the urge came upon me and I worked on it. So I was chuffed, even if this represents one night's work [90 minutes?]

I also looked at the basing, wanting to make them even more imposing with slate and managing to source some pieces that really emphasise some of the more dynamic poses. I have another idea for how to enhance their bases - lots of grasping shattered Genestealer arms and body parts littering the floor. It'll look like they're making a last stand in the rocks killing all and sundry... or like I just stuck a load of random bits on the ground, we'll just have to see. 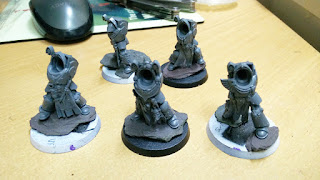 The following night I spent another session just gluing the models to the base. I started off pinning them then just gave up after the second as it was too much faffing. Straight Super Glue Gel to the base. Then I attached the Mace's aiming for more dynamic poses - about to strike down from high with furious vengeance. Most Knight look pretty static but I was surprised how energetic looking I was able to get with these. Out the window went my rule to keep things contained so as transportation is easier. 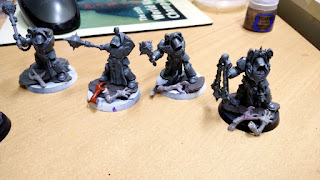 I'll be looking into painting the shields separately in most cases, otherwise they'll cover parts I need to paint. Also you can see from the above picture my idea with the Stealer claws... I'm not sure it works. It reminds me of how Otty can put all sorts of nid bits on his bases and it looks unnaturally alien and makes some sort of sense but as soon as I try it looks like I just stuck a spare bit on the base. I think if there was more room and I could fit a torso on or something it'd work but I think I'm better off just going simple.