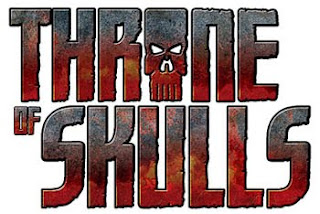 Just after Christmas Ben sent out a distress message saying he thought we'd been away from Warhammer World for too long. The original suggestion was a special Dark Angels event on the weekend of my birthday, which sounded cool for quite a few reasons but also not for a few others. Instead we opted for a more traditional Throne of Skulls event a couple of weeks later. So our tickets and hotel are booked and we'll be attending Throne of Skulls: Carnage on the 12th and 13th March.

Now there are a number of unique things to consider about this, particularly since our last visit. First up the points value is 1700 now, which makes things both easier and harder. Secondly there is no restriction on army choice, insomuch as you can actually play using a different army every game! So as much as I wouldn't want to play Dark Angels all weekend it might be tempting to play them just once... another issue is that the event does have a running theme of 'carnage points'. Some vampiric Dark Eldar is pupeteering these conflicts to siphon of the hate fuelled killings and use it to keep him pretty [Photoshop might be cheaper].

This is where I’m really going to struggle in a competitive sense as nids or Dangles I don’t particularly have what I would term a ‘killy army’. As much as I persevere with kill points missions [and Blog Wars always handled them fairer than most] I go into each and every one under the assumption I won’t do very much. Now there are going to be unique Maelstrom objectives for the games, I think the Carnage Points will be for overall scoring and potential impact in the game but it does make me question my army lists.

I'm looking once again at a combination of Manufactorum Genestealers for board control and distraction [with added killing power should they be able to get into combat in groups]. Add in my Skyshield to keep things alive as long as possible, obligatory twin Flyrants and Twin Carnifex to lay down the Brainleech and I'm weighing up my Malnthrope versus my Venomthrope. Of course I could tweak my list for every game, which will guarantee I'll do one list that will lose me one game but be perfect for another! Still, umming and ahhing over lists, it might be nice to mix things up so I can see which is more effective.

Bottom line I'm not sure there is anything hobbywise that will queue jump into my painting schedule as I doubt any new project would be completed in time, so I best stick to my current tasks and look forward to March.
Posted by 40kaddict at 12:09