40kaddict Towers - We have power!

The electrician came the other day an fitted all the electrics. The original quote we got was £500 but this was a guy who used to work for my mother-in-law and he arranged for one of the lads to come and do it. I spent around £100 on the materials and and the day-rate for the electrician and a few more bits came to a further £180 but it's all done. 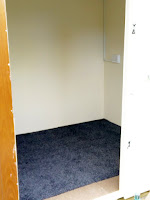 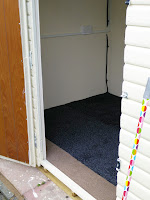 You can also see I've 'laid' the carpet. I had various offcuts from my son's bedroom and our loft and landing. Unfortunately there wasn't enough of one to make it uniform but the two tone element is OK, I did consider having the beige stripe down the middle but that's in two parts so I thought it was best to have it nearer the door as I'll step over the join anyway. 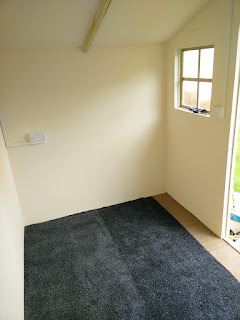 I only stapled the carpet down, it's probably a major trip hazard but I'll mitigate that with a few rugs to add on top which will make it, warmer, more bohemian but a little more grungy and tatty 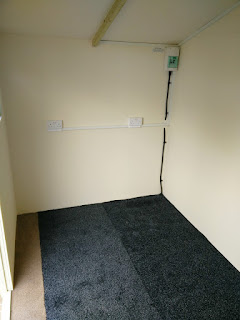 There are two 2' fluorescent tubes in the apex of the roof and and LED spotlight with PIR sensor above the door so I can see what I'm doing when I try and get inside. The lights were a bit dim when I tried them the other night but it could have been them warming up for the first time. I'll no doubt be needing more illuminations at some point. I've still to add the draft insulation on the door frame though. 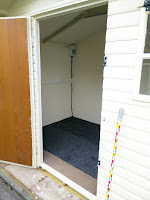 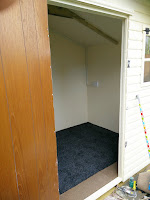 And the first load of crap has been installed. I've so much stuff to move, my wife is already muttering under her breath it won't fit. She may be correct but I have to put in the computer desk first and as I've removed all it's contents and they're taking most of the back room I could agree that it looks like it's taking up twice as much  space as it eventually will. 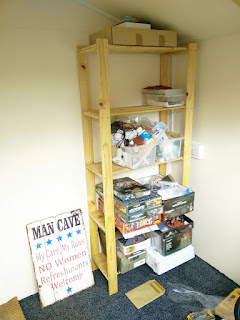 Also some of the boxes on the shelf are actually empty. I'll be organising them a little better  once I've moved some of my stuff over but that'll be a job in itself.
Posted by 40kaddict at 12:54