I had a battle with Otty the other nightbut for one reason or another I decided not to take too much notice of events to make it a battle report but I still took a few pictures because who doesn't want to see my nids versus Otty's Star Wars Empire themed Eldar fighting on the ice planet of Hoth? And boy does that snow effect Realm of Battle board bounce light back up at ya. 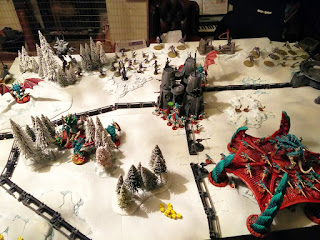 Otty was trying out his Blog Wars army list so we did the mnission with three objectives, your own is worth 5pts, the middle one is worth 10 and your opponents is worth 15pts to you. Now obviously the nids I took wasn't a legal Blog Wars army, because I had two Tyrants and no named character, although the Spawn of Cryptus is present he's not one of the special characters available to use, which I may petition Alex to look into for future Blog Wars. I also took a Sporefield Formation to see how it works. I was up against Otty's 'undead' list made up of many Wraithguard and a Wraithknight so, lots of D. 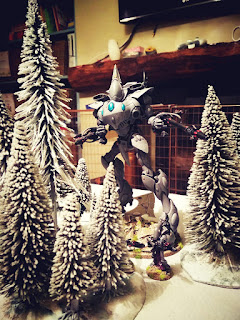 The first turn was pretty ineffective for both of us although my Flyrants happily dodged almost anything that was shot at them on some nifty Jink saves usually 6's, much to Otty's annoyance/amazement. I was equally flummoxed by his Jink saves, failing to destroy a Vyper with my Flyrant. It would take two turns for first Blood to finally be scored by Otty. 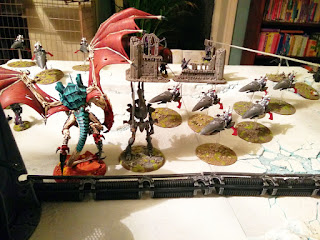 I also found his battle focus a major annoyance, it was like the Edlar get two goes each turn and when you add in psychic abilities that convey twin-linked when everything moves, shoots, re-rolls shooting and then moves again quite often it takes longer than moving my horde army! Obviously that's not Otty's fault, that's the way Eldar play now it's just part of me is hankering after a no frills gaming approach where constant re-rolls are not the order of the day but a rarity. However, re-rolls seem to be the defining mechanism now with FnP, twin-linked, re-animation protocols all being used to beat the odds of a single set of dice rolls. Maybe an Age of Sigmar simplification is about due [not that I've read the rules for AoS]. 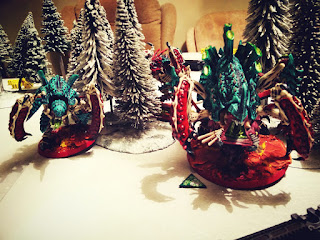 The Spawn of Cryptus got smooshed by the Wraithlord/seer but his children stepped up and avenged their daddy. I really like this unit now, they make a nice second chepaer option instead of Manfactorum Genestealers. Their greater numbers and Stealth mean they're more durable and the added Scything Talons ups their assaults to make them more killy too. 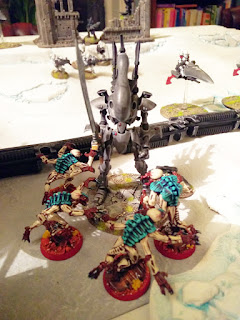 It was round about this point that I finally started to close on Otty's line and suddenly the D-weapons started to hit home. After the Venomthrope was killed pretty much all my big gribblies folded one after another - flyrants, T-fexes, Carnifex and then the Tervigon blew up. 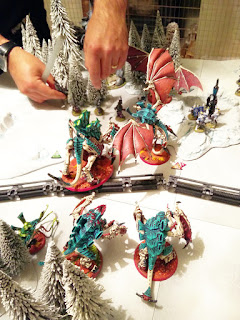 Most of my Deep Striking spores managed to mishap, one did get to assault ssome Warp Spiders and kill two or three but as first outing I was particularly underwhelmed. I'll still have another go with them but it seems a real pain just having them to draw fire because it almost always feels like your giving him things to shoot at when ordinarily they wouldn't shoot at anything. I may not be losing VPs to them but it still feels liek a pointless exercise. 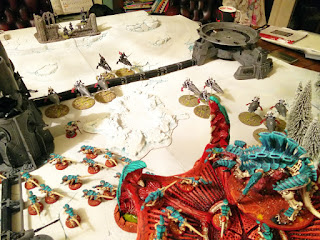 All I really had left at the end was termagants and Spore Pods. We were at the end of turn 3 iut was 1am and I couldn't foresee how I could actually achieve any type of comeback so I called the game. I'm not sure what I could have done better, perhaps kept my flyrants together to maximise their output. I knew that all that D was quite tricky, Ben and PeteB have been discussing the horrors/benefits of it for a while now. This was clearly evidence of how effective it can be because it all happened at once, which is a relief in a way because the game had been really entertaining up to then. Otty couldn;t seem to do anything and I was just Jinking all over the place, we had a great laugh. 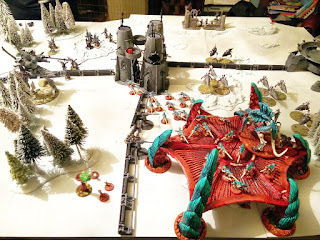 So a disappointing result but a really fun game, what more can one ask for?
Posted by 40kaddict at 12:29