Not sure why but the Cerastus is getting the love at the moment. Progress on the Bastions were goign strong but he snuck in there and I had my first painting session in the 40k man cave where I laid down some more metallic stippling. Once again this is a bit weird because the mottled metal effect is really cool but quite bright, this will be toned down with subsequent washes and the obligatory verdigris but it's always a gamble at this stage I just have to have faith that'll come right in the end, well that IS the most important rule of painting afterall. 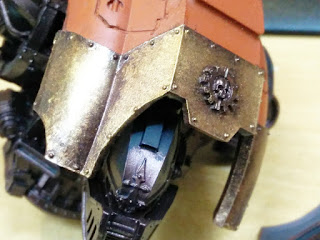 The funny thing is that the metallics are actually something I've done a lot of and should be confident about but every time I hit these milestones where I think, that actually looks nice, I should stop there when I know the end result will actually look just as good if not better. Doubt seeps in and that will cause procrastination and perhaps make other projects seem more appealiing leaving this in the doldrums. When you add in the doubts that appear that there is still loads more to do, despite my best efforts to convince myself the 'metallics are actually really easy', which then evolves into 'yes but there's loads of them'... You see that's the problem with painting, too much time to THINK! and those thoughts are often a barrier to progression. 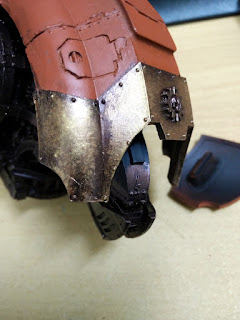 Yet another internal debate is the actual House colour scheme of the Knight. This will be house Corvus, an off-shoot of house Raven. But I'll still use the supplied decals [which I may live to regret] just because they're awesomely detailed. It may result in a rather incongruous finish amongst my freehand symbols elsewhere but they're too good to pass up. However, there are elements of the Corvus scheme I don't like, mainly the black quartering but also the chevrons. With my issues painting the Ravenwing I don't particularly want to paint black if I can help it. Of course as it's an off-shoot of Raven I can do whatever the hell I want which means I can switch black to Bonewhite and not include the white lines in the yellow black Chevrons 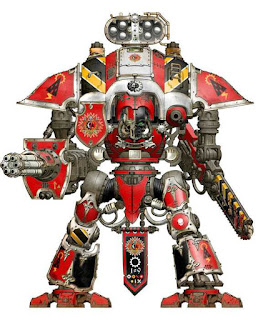 But I have just rediscovered this blog http://musingsofametalmind.blogspot.co.uk/2014/06/imperial-knight.html which has a pretty cool take on Raven that I'd like to follow. It has the level of weathering I'd like to do and more importantly think I'm capable of. 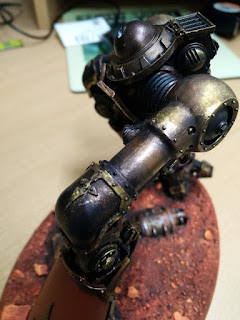 The legs have received a little more attention than the body, I'm thinking I may need to add a small amount of gun metal as extreme highlight to match up with my long in gestation Dark Angels drop pod [now that's something that'll never get the verdigris treatment]. 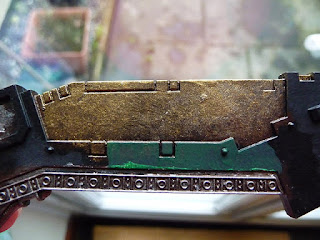 But the gold is just a little too 'flat' it needs some more tone on top to create more patination in it and add depth and texture. There's a lot fun doing metal like this, there's no real skill involved it's mainly stippling with a crappy brush and adding washes in places to create that depth. 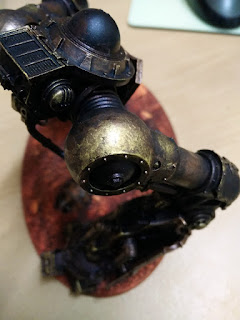 And of course knights are full of metal underneath the carapace so that's why it's deceptive because the process is simple, it's just there's lots of it and then there are details I'll want to pick out to make the mass of metals more interesting and then I have to paint the carapace which isn't just red but all the other colours [not to mention the special FX afterwrds] and that's when the task ahead looks insurmountable and my Blog Wars to do list unlikely. I'm confident I can manage one of the three outstanding elements, perhaps two but the Ravenwing seem doubtful...