I continue to split my time between a number of projects. I doubt this makes the most efficient use of my time but I am just trying to fit stuff in so even if I just paint for five minutes I feel like I've moved things on just a little bit. Sadly I've not yet taken pictures of the bronze/brassy progress I've made. That's actually quite exciting but despite my confidence that most of it will be resolved thanks to verdigris and other metallic techniques I've adopted I'm still trying to be neat and tidy when in fact rough and ready stippling looks even more effective at the end. I'll get my head round it eventually, most likely as time runs out. 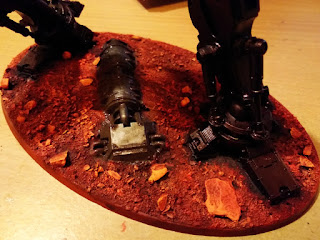 However, this update is all about the base, not rubble. Yes I've Red Planet BASED! the Cerastus and I'm really quite pleased with the results. The exposed power conduit had a coat of gun metal, devlan mud and now Typhus Corrosion before I try my hand at rust effects again, like the Chaos/Genestealer Cultists. My only disappointment was that I'd planned to also do the bases on my Genestealers. I know they're not priority but they are on my To Do List and 20 stealers based would give me a warm fuzzy feeling as that's 20% of the paint job right there. But I never got round to it so never mind, no harm no foul.

I did however continue working with the metallics on my objective markers. These are the Force Field Pylons and Teleport Homer from Battle for Macragge, and a couple of standard Teleport Homers to make the six. Still not sure how to differentiate the maelstrom numbers but I'll cross that bridge further down the line. 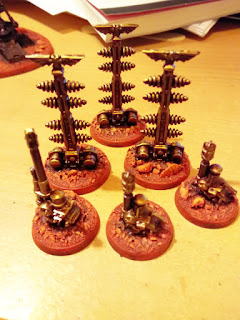 They're all a bit bright at the moment as I've highlighted up to gold but I have washes to add to tone it down again and then verdigris and any lighting effects on the pylons and homers. 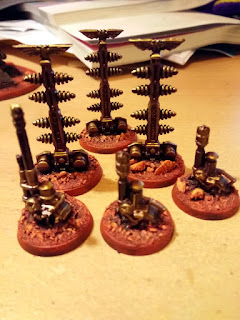 I do have some other 'objective-type' bits knocking around that I could throw in as alternative objectives, that might help in the numbering stakes, but these would work in a pinch. They're definitely a quick win for Blog Wars at this stage.