Having promised to take my Dark Angels to BWX I created a list that had most of what I've got painted, plus some other bits that will 'make do' and some I can hopefully achieve in the intervening period. However I found myself in the unpleasant position of having a new army/codex to get to grips with and I need to do it now and I can only achieve that with some part-painted models. So I arranged a game with PeteB and he was actually shocked [as you, good reader will too] to see me turn up with figures that weren't painted.

So I have 2 tactical squads with a Rhino, 5 Scouts with Sniper Rifles and one Missile Launcher. Asmodai as my Warlord with a Techmarine and 5 Deathwing in a Land Raider Redeemer, a Ravenwing bike squad, and a Missile Devastator Squad in a bastion with Quad Guns. 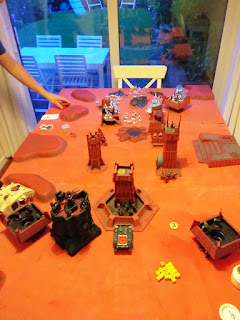 Missile Devs, in the Bastion. 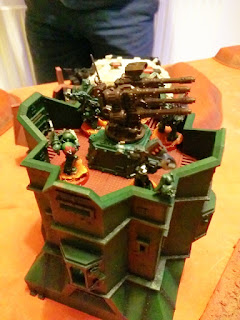 Combat squadded Tacticals, there's an objective the other side of the tower. 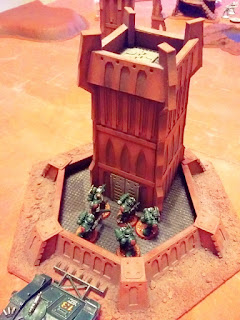 Two Wave Serpents filled with Fire Dragons, Striking Scorpions, Dark Reapers in the watchtower a Fire Prism, some Swooping Hawks amongst other things 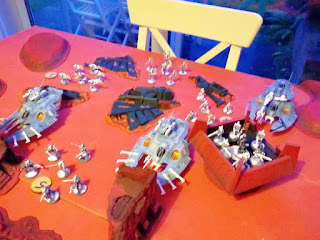 Pete's first turn and he manages to wipe out one of the Tactical Combat Squads for First Blood. Typically I fail just enough cover saves to lose all five. He surges the Wave Serpents forwards to pressure the Land Raider. 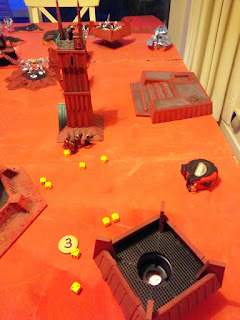 With the Wave Serpents in my face I had to deal with them. Not having any experience and this being a learning game my immediate thought was just to ram the Wave Serpent in front but Pete gave me some advice, the plan was to hopefully wreck one or both of the Serpents with the Devs, Quad Gun Plasma Cannon and Krak Grenades on the bikers and potentially mop up the contents with the Flamestorm Cannons. However, thanks to Jink only one Hull point was taken off it and I lost my Plasma Gun Tactical to 'Get's Hot' when he fires from the top hatch of the Rhino :( We did discuss later on the merits of the Terminators charging out of the Land Raider and and breaking a Wave Serpent apart, with the view to starting the turn again, to achieve that as a learning experience but I decide to press on with my original tactical choices. 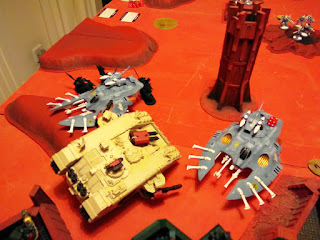 Swooping Hawks arrived in my Deployment Zone in the newly vacated watchtower. 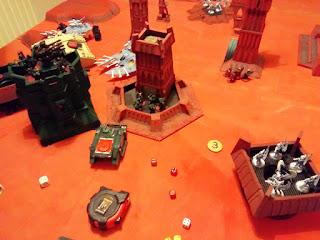 Their grenades targeting the Dev squad in the Bastion, not sure how effective it was. 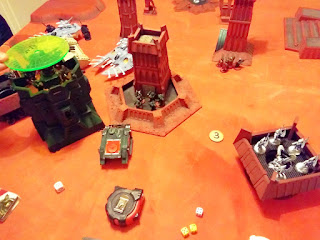 After quite a while trying to find the Ravenwing special rule in my electronic Codex and being super stoked for re-rollable Jink saves I was then immediately deflated by having my tiny biker squad obliterated. 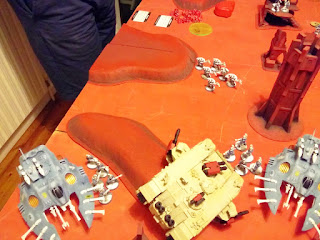 Matters made worse by the now de-bussed Fire Dragons destroying my Land Raider. It survive the initial fusillade from the Dragons on the right, only one pen, but the second squad melted it and one of the terminators in the process. 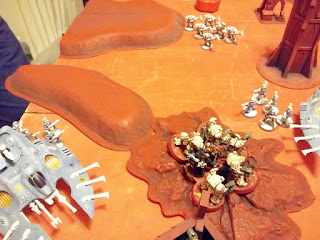 I'm now left with only the two Devastators, which became none! At this point I realise I've made no mention of objective, well in fact it doesn't really matter, most of mine ended up being unobtainable, Pet was scoring with objectives in his deployment zone and I think the Land Raider scored him a point so he was well up on me at this stage. 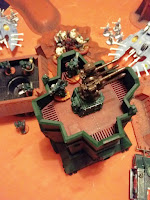 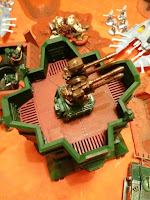 I get an objective to destroy a unit outright but if I destroy 3 I get more VPs. I split Asmodai and the Techmarine from the Terminators. The Deathwing head for the Fire Dragons on the right they shoot them and assault losing one of their member but killing the dragons outright. I take a gamble to get my three units, the Techmarine assaults the Wave Serpent, I take two hull points, but fail to destroy it with my pens. Meanwhile Asmodai assaults the remaining Fire Dragons, which are down to just two thanks to some lucky shots but he fails abysmally in assault, but thankfully so too do the Dragons. 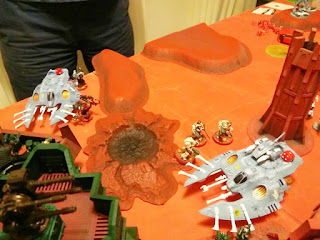 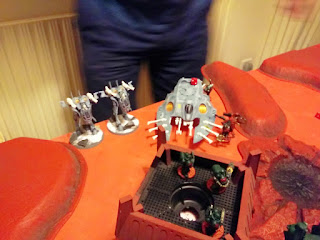 I'd had the Scouts in the really tall tower on the right but moved them towards my deployment zone and the central tower. There were actually quite effective with some shooting, or did they capture the objective in front of the tower? I can't quite recall what it is that they did, I think they wrecked the Wave Serpent but they became a target for Pete this turn and I was happiest with their performance, which says a lot as they didn't really do much else! 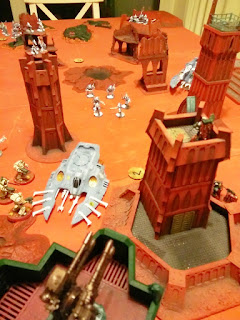 As the War Walkers finished their movement  my Quad Gun Intercepts and kills one. 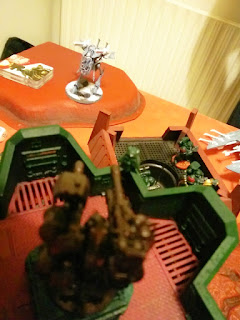 The second War Walker wrecks my Rhino which had been moving round the back to get away from the Swooping Hawks and deploy my combat squad of tacticals. 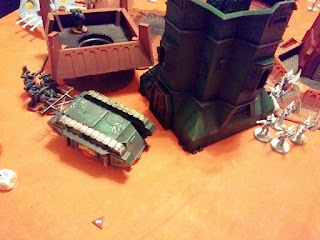 Warp Spiders move up, into the position previously occupied by my Deathwing so I'm guessing they ate them or something. 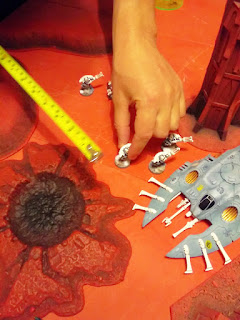 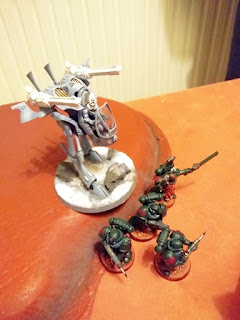 The Techmarine joins Asmodai who was only able to kill one Fire Dragon in the previous assault phase, seriously if you can kill a Warlord with this guy then you deserve more than just 3VPs, he is absolute rubbish and I'm thinking Ezekiel for 5pts more may be a better choice for BWX, although my Librarian is a proxy whereas this is the proper character model.. 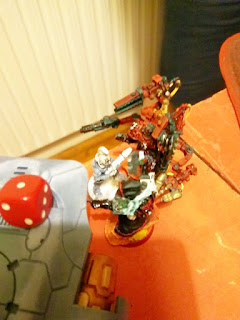 The central tower gets wrecked but my scouts stand fast in it's smoking ruins. 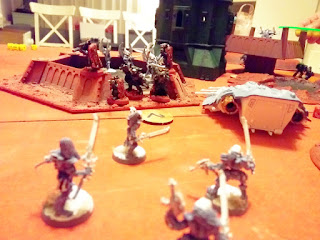 The Scouts prepare to go down fighting, which is more can be said of the slightly more experienced units that have fallen like dad leaves around them. 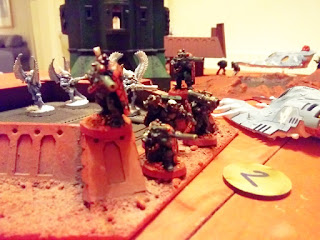 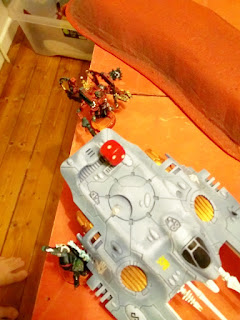 My Tactical Squad manages to destroy the War Walker, they really are quite vulnerable to almost anything. 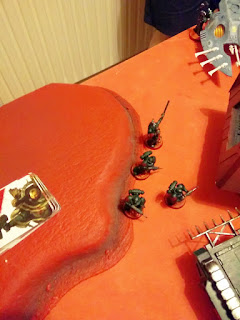 And the final insult - Pete 'claims' my Bastion for his own, no VPs awarded, just bragging rights. 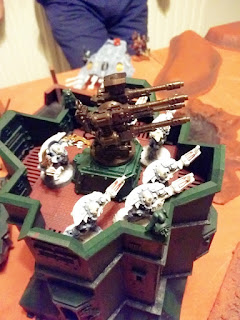 I think the final score was 5:1 to Pete, but I only had the Scouts, 4 Tacticals Asmodai and the Techmarine. I'm thinking back to when Dawn of War II came out and they said that reduction in unit numbers was to give you the impression that every Marine matters, a single loss is a huge loss. Of course no one wanted that sort of game and ultimately the expansion increased the numbers significantly to levels similar to the original DoW. Well I certainly mourned every lost Marine here. I was genuinely disappointed about how fragile things were. I expected Power Armour to shrug off all sorts but it was the cover saves I was reliant on. The Land Raider was more vulnerable to the Fire Dragons some of my Tyranid MCs, just one Pen will kill a Land Raider but it takes 6 to kill a Tervigon!

In all honesty when I see the amount of figure I'm putting on the board then this is actually how I imagine the outcome is going to be but I know on paper they should be more durable and effective but I actually felt my nids are superior and that's despite me often bemoaning their ineffectiveness. It's early days though so I shouldn't throw in the towel just yet. I am thinking though that the Dark Angels will be more a show army, that is unless I go Ravenwing which really do look quite durable and effective, that is if I can actually paint up some bikers to deploy.

But it does make me appreciate my nids a little more, I did have an epiphany a few months back when seeing my MCs all aligned about how chuffed I was not to have space men in vehicles, even if it did have a Tervigon or two transporting  gaunt embryos. I was just pleased just to have an army of creatures, no tanks or giant robots to cover weaknesses Anyway, I've a game with Otty coming up where I'll take the nids because as a fellow nid player it's nice for him to see how I approach them, maybe share tactics and theres a chance he may take nids too which is always an interesting match up. Then my next game against Ben will be Dangles again so I can get in some more experience.
Posted by 40kaddict at 12:35