Dark Angels - Bastions, it's not easy being green

Bastion 1 has had it's Angel Green buffing/stippling. As you can see the initial result is so much better than the the Hunter Green, I've managed to blend in the shadows a bit too. I'll be adding some rust elements in later on so it should look really quite vibrant and cool. 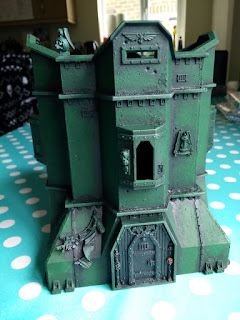 This is how the highlighting goes on with the Angel Green, I'm practically stippling it on with a big chunky kids paint brush. It almost looks like a ceramic tile in it's richness. This was on Bastion 2 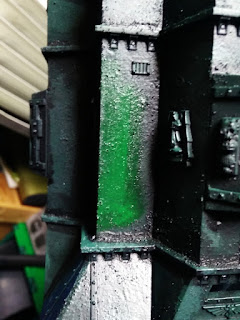 but even so the end result will look like these, which bears little resemblance to the wet version. You should also be able to see some of the next level of highlighting on the edges and ledges. Not sure which GW paint that was [edit: Waaagh! Flesh] but the Manchester store manager said he used it but when I got it home I wasn't convinced. Instead it'll be used for highlights on the Bastions, it'll shift the colours hue a little bit compared with the Dark Angels but I'm hoping it won't be too noticeable. 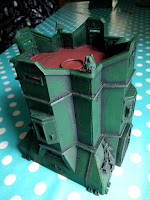 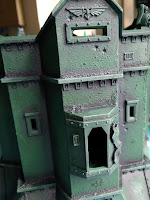 Close up you can see where the Martian Ironearth crackle paint has created some really interesting paint chips. Because the cracks are formed based on how thick the paint is, so long as you smooth out the edges ,it'll blend seamlessly with the texture molded onto the Bastion [and any textures you've added to it]. 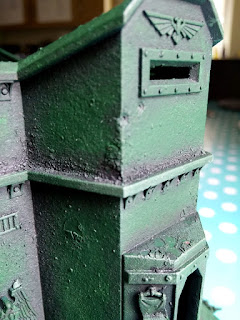 Bastion 2 has also been sprayed green and shadow washed. 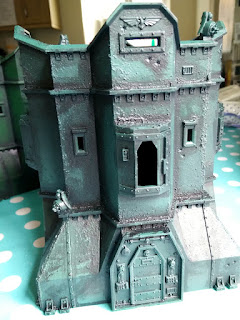 I'm still going with the red roof, it helps the Dark Angels blend in when they're on the battlements so I'll try not to obscure it too much with metallic scratches and scuffs, because I tried that on Bastion 1 and had to repaint the red because I felt it had lost something. 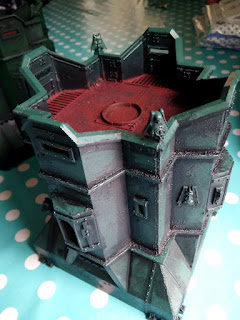 I'm hoping that some of this texture will work out as rust perhaps... 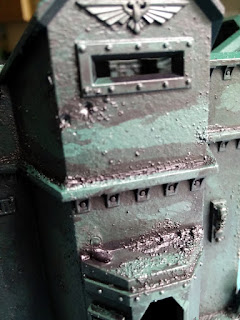 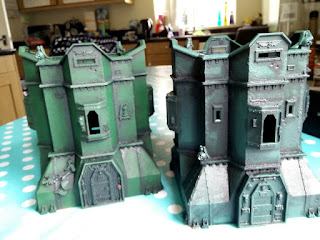 Of course progress will be slowed soon by detailing and I've still got to deal with the heavy bolters. 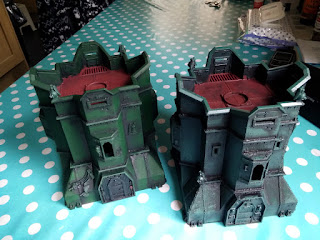 It's nice to have progressed so far on these though, particularly so soon into the Hobby Season [although I did start the before the season began]. I've also completed the first set of highlights on my Dark Vengeance Tactical Squad so that's coming along too!