Hopefully no one really noticed the cock up in that I posted the same article twice but actually wrote it from scratch with only a few times where I thought, hmm this seems familiar. Just goes to show how Swiss cheese my brain is at the moment!

With a bit of momentum in the bag I was in a position to get the undercoats on this bad boy. It's really handy that you can dry fit a lot of these pieces, most of the armour plates snap into place so you can get a good feeling for the end result but then detach them so you can get to all the skeleton structure for the painting. 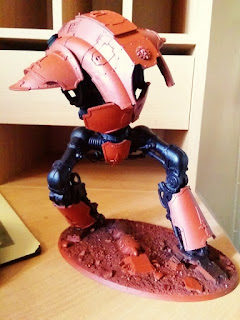 As my pot of Tin Bitz rapidly approaches it's end of life I got some Warplock Bronze as a replacement. It's very similar although I think it's a tad more red/warm. It goes on lovely though, very smooth and not thick at all but with just as good coverage, if not better, than Tin Bitz. 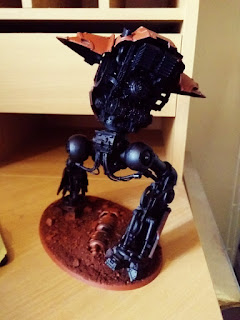 All the black will be bronze with some brassy accents and my usual copious amounts of verdi-gris. Although there is a very 'real' fluff reason why all the Dark Angels armour is patinated I'm not sure how I justify this on these bigger Ferron elements, particularly as so far it's been described as an arid planet full of certain desert-like wastelands. Still, it's an anomaly I'll one day address, I'm good at making stuff up ;) 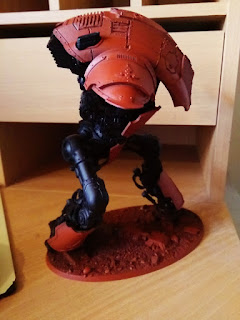 I finally got everything pinned, magnetised and primed. Obviously there are elements that need gluing in place but these are bits that are unattached until such paint as the painting process isn't compromised by their attachment - carapace, shoulders, shin guards, chest guards etc. Unfortunately I think something has been lost slightly in the pose since my early WiPs. I can't quite explain it but he appears to be toppling over in this picture. not quite as planted as I first thought. It isn't quite as unnatural looking in person so hopefully I can capture the true majesty when it's complete. 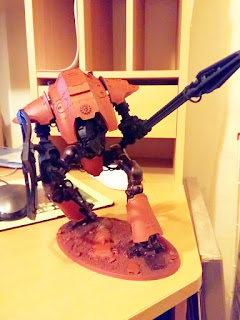 Bronze elements have been painted, though some still to do, then it'll be brass and a whole lot of washes to add depth to the metals. Then it's the reds and any additional heraldry colours with verdigris and special FX being the last elements. 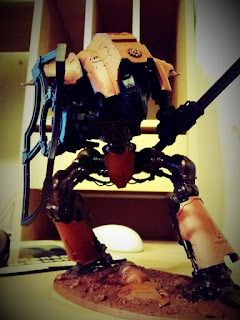 One thing I haven't added is the banners, the resin chain attachments snapped so I'll be using some jewellery chain but it's buried in an undisclosed box somewhere so it'll be added once I've made the move to the man cave. 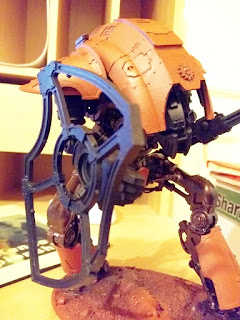 Lastly here's my mate Ben's Cerastus, this was one of the WiP pics he sent me a while back, it's actually yellow now. He's promised me the completed pictures soon, with the rest of his guard pics. It'll be cool to see these two together when they're complete. They won't be twins, given their different colours but it'll be interesting to see them paired up, 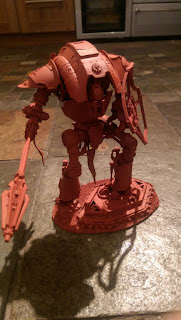