I somehow set two posts scheduled on the same day so I'm a little behind but =with the boards all done it was time to seal up any gaps. I used 2.5 tubes of decorators caulk on it but I’m convinced the expansion/contraction of the shed will probably crack it to pieces. 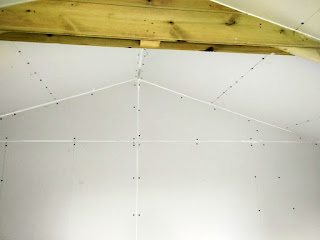 I'd also tidied up all the windows, if you look at the two pictures below you'll see the one on the left was with the plasterboard and I didn't like the open cut window frame. 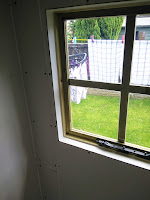 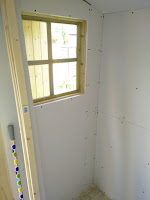 So I was going to buy some wooden strips to cap the inside frame but remembered I had some old hardboard/MDF sliding doors for my sons old bed [actually the one before last] so I've had these in the garage for about 4 years but I was using them for basing terrain. Anyway I trimmed these to fit and faced all the insides of the window frames. 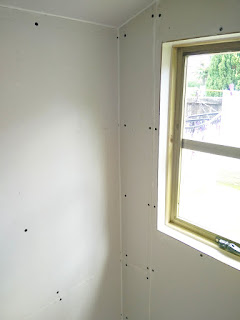 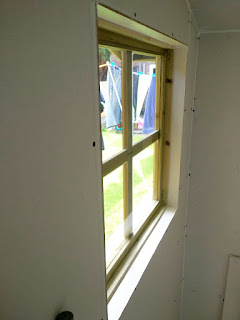 It took a couple of sessions with the caulk as some gaps were bigger than I'd have liked. I had planned to put strips of plasterboard in to bridge the gaps but I couldn't be bothered in the end, which I'll no doubt live to regret. 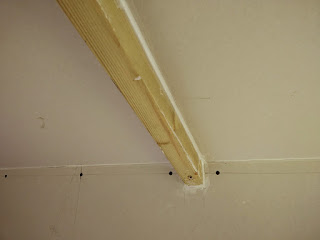 This was the biggest gap but it all smoothed over fine in the end. With the sealing done it's 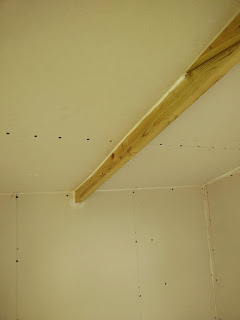 For the door I finally got the facing panel to double skin it. This is a piece of teak panelling, previously this was part of a whole wall seciton in my parents dining room. All my childhood this was on the wall and only now as my Mum redecorates has it been removed. So I nipped round and cut it to size, a quick slash with a Stanley knife and this splits nearly as good as plasterboard. 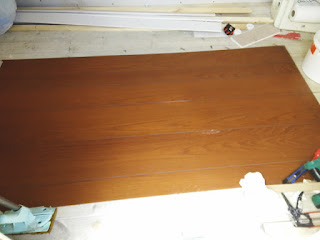 It was too big to fit in the car but it's incredibly light, if just a little awkward so I walked it back home and then came back for the car. It's well worth it if just for saving a little bit of nostalgia for me.
Posted by 40kaddict at 12:24