40kaddict Towers - one side done

I think it was Saturday I got chance to quickly measure and cut the second board to finish the right hand wall. As I mentioned in my last post it could have done with a little stud to attach in the centre of the two as the boards do flex a little if you push them but other than that it was a pretty straightforward procedure. The measuring was good enough and the top lip is angled so once again the roof panels have some extra support. By installing the wall sections after the roof the wall will all offer support underneath for the roof panels. So even if the screws in the ceiling somehow failed catastrophically there is actually something holding it up at the edges. 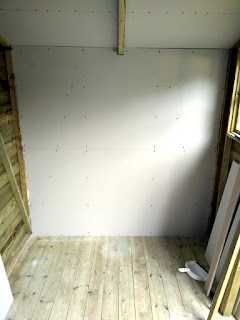 On the day after this I got opportunity to measure up the bottom left wall panel but my obsessive effort on the shed has caused a bit of friction at home. I'm struggling to balance my usual tasks with this and my viewpoint that this should be my priority because:
and a whole host of other reasons that make this a priority. It doesn't preclude other tasks but the fact I'm in there constantly trying to get it done may be perceived as the shape of things to come when everything is complete, although that won't be the case.

Anyway, I'm taking a couple of days off building so it's less of a contentious issue, getting a game on with Ben and we'll reconvene when the project is under more favorable light, at least it should give my back some time to recover.
Posted by 40kaddict at 12:43