Now this is a man cave!

I'm not the only one who's relocating their hobby enterprise, a number of people have shared pictures of their efforts or their planned purchase on the Facebook group. Of these I had to reshare on the blog Otty's Man Cave, although by the size of it it's more like a cave system! What's more impressive is Mr Otterburn has built this with his bare 'man hands' from scratch no doubt after going out hunting non-favorit,e non-named animals, probably a Mammoth, making fire from sticks and wrestling a blue whale! He's like Bear Grylls and Tommy Walsh rolled into one! 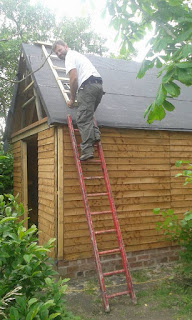 This is not some pre-built shed, oh no and I bet it's possibly no more expensive but if you've got the skills to construct such a beast, including the base and a back capable of smashing up a load of concrete to put down for it then this is definitely the way to go. 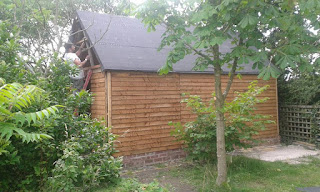 I don't even know where I'd start with this sort of build. I spend about 15 minutes Every night after putting up one plasterboard panel just trying to work out what needs doing next and whether I’ve everything I need to get it done! 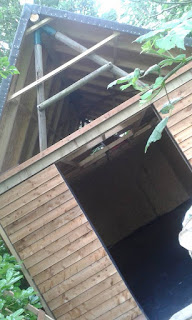 Anyway, he's included a little bit of background info with the pics so I'll leave you to his knowledgable descriptions: 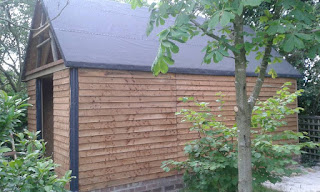 The whole shed is lined with dpm then clad internally with osb and as soon as my parents front room is decorated and furnished, I will inherit carpets for the ground floor. 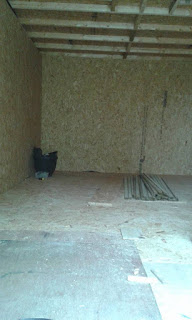 I've left a hatch into the loft space which I will be installing a set of wooden stairs. 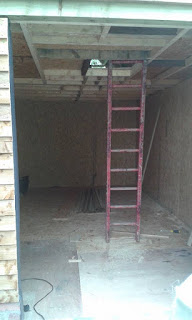 Ive used osb as flooring in the loft 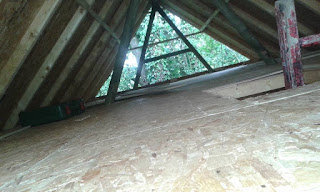 Not only that but he's sent me a load of pictures of his recent additions to his Tyranids including his scratchbuilt Bastion so alongside future updates to his man cave build I'll be sharing those too.
Posted by 40kaddict at 12:13