It's been a while since I featured my Dark Angels Bastion this was mainly due to waiting to get hold of some Army Painter Angel Green Primer, so I could basecoat it real quick. In the end I picked up some Plastikote Hunter Green which isn't quite right but it was in a local hardware store so easy to get hold of. I then found it in a different store for half the price so perhaps patience is a virtue... 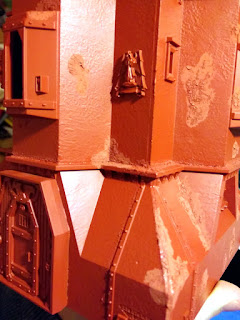 As you can see the Bastion has had some Martian Ironearth added to it. I'm hoping it'll appear as rusted paint flecks, I saw someone else use it on a diorama and had to give it a try. 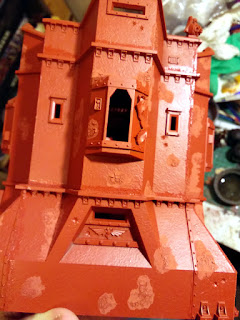 Goodness knows if this'll be realistic enough and I think I'm actually making this more hard work for myself but it's entertaining me and I've got a spare one I can always try and do more conservatively if this goes wrong. 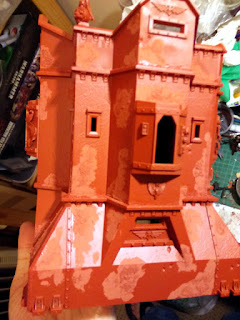 I kind of want some proper crackle medium like what Greg used on his Ork display board but it's £15 a tub here so it's another expense I can't really afford. 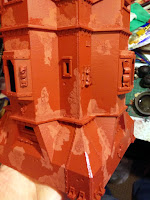 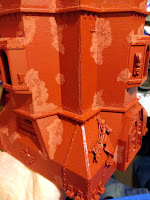 Anyway I also decided to try salt weathering - FIRST. TIME. EVER! So I may have got a little carried away. 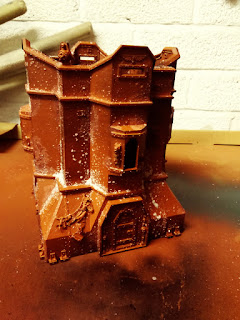 I did brush some of this off  before adding the next bit of spray, it looked like there was going to be far too much of the Red Oxide on show and I probably should have added some other effects to the undercoat for when it's revealed. 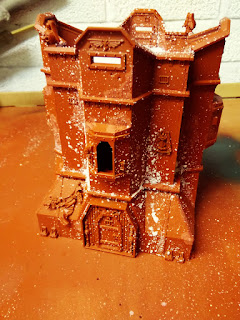 However, moving on from this point I turned the bastion upside down and used a Matt Black to add shadows underneath and in corners. The picture will be forthcoming but really I got carried away, again, and started in with the Hunter Green. 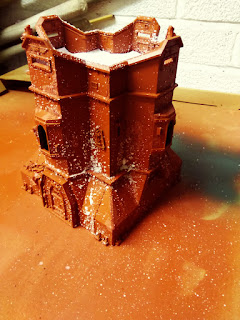 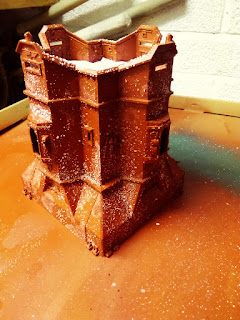 Add to that the fact I did run out of Magnolia paint in the shed, nipped to a local shop to pick some up and it turned out to be more cream of mushroom than cream of butter and ended up with a two tone shed my colour choices have not gone down well although I did have some success with some Balthasar Gold, which will be revealed soon.

Ultimately the Hunter Green is a bit bluish and doesn't have the 'deepness' I was hoping for. I applied some more black which helped but we'll have to see how things progress. I may well crack out the airbrush for the first time, I think the strange properties of my Valejo Dark Green might work well in the airbrush as it behaves more like a thick glaze. I'm thinking it might be able to tint the Hunter Green more towards the hue I'm after without doing much else but we'll see what it's like when these spray coats have dried.

I've since moved on from this I'll share the posts in due course but suffice to say I wasn't as studious at removing the salt as I'd hoped and what I'm now seeing is salt staining on all my painting. Essentially whatever remains of salt is under the paint is bleeding through. I keep saturating it hoping the salt will dilute and not reveal itself as the water evaporates but so far no joy.

Bearing in mind that future posts will reveal this has had a coat of black primer, Hunter Green, airbrushed Dark Green, had most of the salt scrubbed off with a toothbrush, another coat of Hunter Green, shadow washed and then drybrushed Dark Green and soaked and scrubbed repeatedly with a paint brush and still the salt is bleeding through. If anyone  knows how to mitigate this/cover it up I'll be pleased to know as if it's still bleeding through after those coats I don't know how to start again. I have built up a second Bastion just in case but I was so pleased with the what I'd done on the left, which was rescuing the initial basecoats, but to see it  go wrong like this is really frustrating.
Posted by 40kaddict at 12:11