I'd been a bit apprehensive about the weekend. I'd been asked to referee a kendo tournament. As I haven't done kendo in 5 years, refereed about the same and I'm no longer even eligible to be a member of the British Kendo Association because I'm no longer a member of a club then I wasn't sure but my friend, and British Kendo Team member, Tom Widdows invited me to help out and I changed my mind. I'm glad I did as it was a really good day but it did mean I had a lot to do on the Sunday to make up for the lost day. First up I had to mow the grass and build a new computer table before I even got in the man cave but when I did I was on a mission. I measure up the window board and then insulated it. 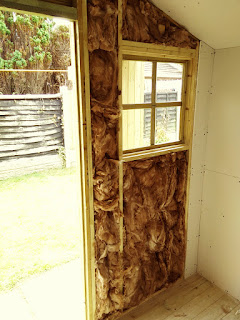 The board went in bang tidy... 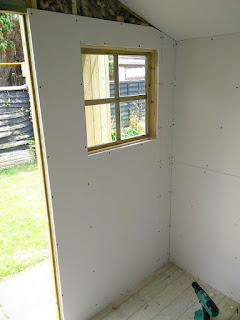 ...erm and then it didn't because the small corner pieces were set back a bit and I couldn't get my head round this discrepancy 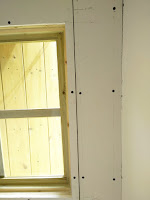 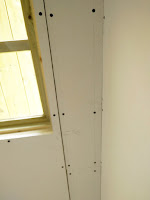 Until I realised the offcuts I'd used were from the ceiling panels and these are all 9.5mm thick compared with the 12.5mm thick wall panels! What an idiot, oh well maybe the caulk can help disguise the step. 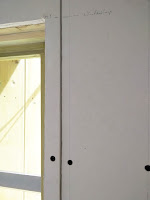 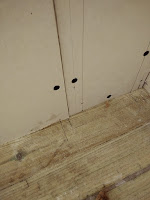 So I continue on with the back and put the first lot of insulation up after measuring the bottom board. 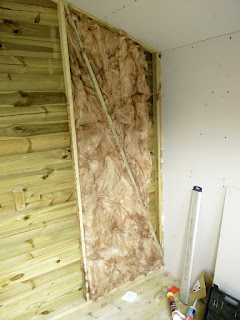 Second lot of earthwool goes in 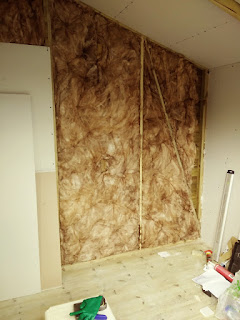 And then the board secures it all in place. 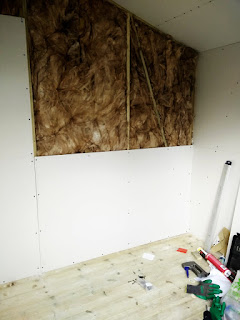 And the upper board goes in too. 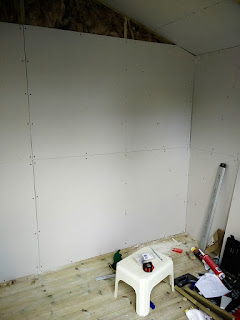 So the back wall aside from the two apex pieces is done. 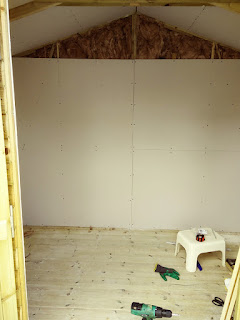 I then quickly insulate the other side piece. I actually get one of the smaller pre-perforated sections to go in without need for staples. Wished I'd done that on the right side as that's all piecemeal sections whereas this is super stuffed. I actually cut and attached the board too, I just ran out of screws so didn't take a picture as only half the screws were in place. I bought two packs of 200 screw and expected to take one of them back and instead I need to buy another bag! So I'll have spent £9 on screws alone, it keeps adding up. Whilst I was at it I also measured and cut the left hand window section. 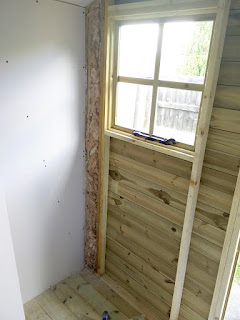 And whilst I was at it removed the right hand side panels and used them as templates to cut new 12.5mm thick sections and installed them. I may be short of screws but I can use time wisely to fix this mistake at least. 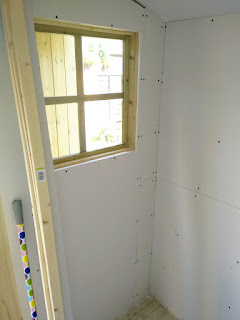 As you can see it's slightly tidier, less of a step down at least between the boards. 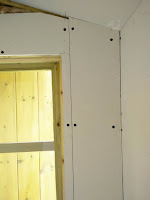 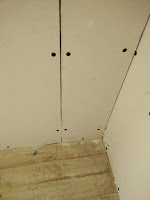 And to cap it all off I trimmed one of the pieces to go on the door but didn't take any pictures, it's super awesome though. So all that's left to do of the boarding is the two back wall apex pieces and the three front wall apex pieces, oh and to get some screws to do it. But overall this was a pretty epic stint, I've shredded my Tyvek suit with the amount of measuring but luckily my back held out. I expected this to take about a week of evenings to get done so I'm stoked at the progress.
Posted by 40kaddict at 12:17