With a concerted pushI managed to get the Knight through to undercoat stage. Mostly dry fit in places - carapace, shoulders and obviously the weapon mounts. Ultimately this is the stage I watned to get to so I can happily move onto prep work on other porjects. As there are still hurdles to overcome here - magnettising the missile launcher, some pistons on the weapons it seems a safe place to pause, hopefully coming back wiht a fresh view to move past the obstacles. 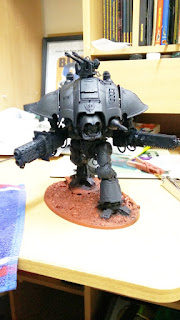 Hopefully you can also make out the hatch and the fact it won't shut properly. I drilled out the hinge and actually put a pin throughto make it open/close. Unfortunately it's positioned such that it won't close properly and the hinges will potentially break with continued use but to get this level of accessibilty was quite a challenge so I'll live with it. 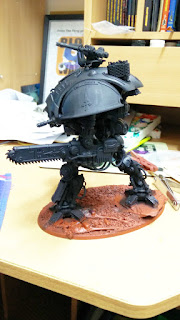 Having undercoated the pieces separately I was able to use a piece of card to mask the areas around the feet and use Red Oxide Primer on the base. I could have used Vermilion over the black but I'm always more confident that the car spray will form a better base to paint on. 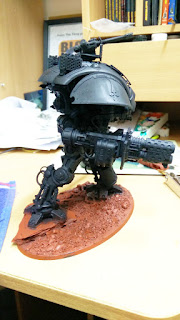 As this Knight will be green and have a similar theme to the Gerantius scheme I will need to plan how I'm going to achieve that. As I typed this I had a vision of yellow and black chevrons to tie it in with the Cerastus but this guy is not connected with House Raven so I really shouldn't do that. Checkered pattern though, now that would fit with his origins and create a whole lot of work I'd not planned on - thanks imagination! 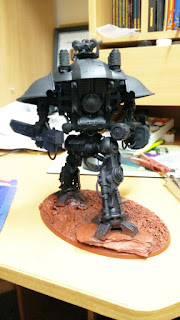 Either way next step is Red Planet BASE! and then to stipple any of my acrylic paints from the same make as my Vermilion onto the armour plates to create a texture I can riff off further down the line. It was so effective on the Cerastus and if I can repeat the effect in green I can replicate it across all my armour and definitely my Ravenwing too [as I already showed it was possible in the black areas of my knight].