Another decision made, although I wanted a predominantly red Knight every time I placed the front shin guard in place the whole red panel looked too much. I didn't really want to chevron it like the right guard as that wouldn't work with the planned AdMech cog decal I wanted. So I just went black, like House Raven. I know I've introduced white in places but adding highlights as I did to the chevrons has really tied this together. I love the slightly textured nature, it's almost looks like it's been coated in leather. I wonder if I can achieve this on my Ravenwing. Regardless I'll definitely try and find a way to use these craft acrylics to texture up my next Knight. 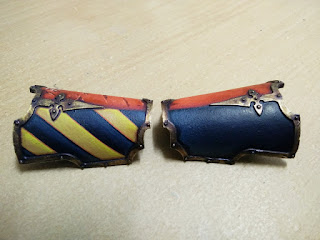 I then gloss varnished the shin guard and applied the House Raven symbol and an AdMech cog. I'm not 100% convinced now, the decals look too perfect. It was definitely worth doing and the models is far from ruined but I'll be finding ingenious ways to try and make them look less pristine. 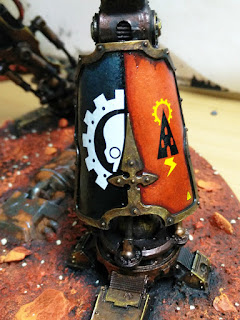 I may be just a little hasty in my assessment though, it could just be the gloss finish. With some shading and maybe overpainting the cog so it isn't pure white, battle damage and a matt varnish it'll blend it in. The sad thing is I probably could have painted that cog freehand, and I'd have retained the lovely texture underneath too. 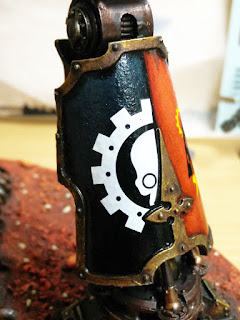 I've just spotted this isn't quite perfectly aligned as I'd thought, just a degree or so clockwise but the decals are fiddly. Still I'll weather this in too. 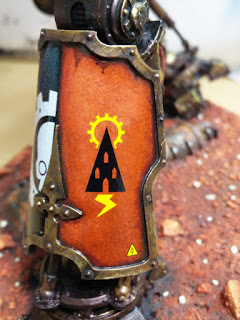 I also wanted to add some numbers on to the chest plate. Big numbers always look great on things. Not sure it's as effective as I'd hoped as the decal numbers are a bit measly but it adds some more interest and if I weather it up it won't stand out as much 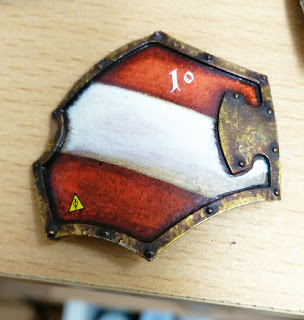 Having spent a significant amount of time applying all the extra decals and being satisfied with the results but not exactly overwhelmed I decided to delay no longer my bronze weathering. All I wanted to do was the Power Lance, but I managed to do the carapace too. The actual realism in the verdigris is suspect. I'm still not sure exactly how it forms, I always imaging it'll be worse in areas where rain pools. Or, where the surface tension of rain would mean it was wet longest. So, for instance, you can see the top of the Lance has less patina than the lower edges. It's probably far from accurate but I definitely think it works and amongst the mild disappointment with the decals the verdigris has lifted my spirits. 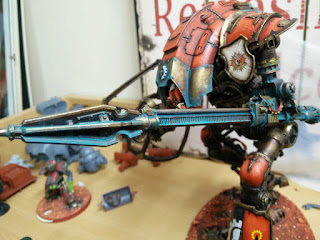 I wanted less weathering on the carapace, principally because I thought I'd done a pretty bang up job on the metallics so I didn't want to cover it all up. So I was more sparing in the application with concentrations only around the rivets, creases and the bottom edges where it might pool slightly. 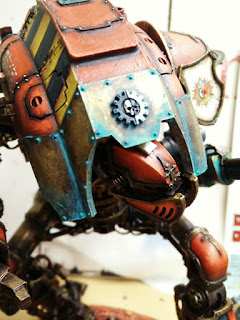 It reminds me of the sensitive weathering Marc van Holst did on his Iron Snakes. I'm pretty sure my process is a poor imitation, I'm just thinning down turquoise but I'm really happy with the results. 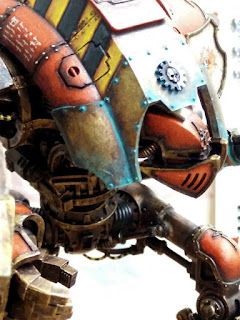 The only other thing of note was I tried using some of my new Anita's turquoise. Believe it or not I'm still using the same pot of paint I bought 5 years ago that has covered every nid I've ever painted, including the fortifications. It hasn't quite run out so I only occassionally dip into the new supply Evan S got for me. I'd already noticed the formulaiton is slightly different, it's not as opaque, even though it sounds thicker when I shake it, it's just a shade lighter and when watered doesn't quite behave in the same way for verdigris. It's a small annoyance I'll have to come to terms with eventually but for now it was back to my trusty pot [while it still lasts].