Right, let's 'foot this ship up', or rude words to that effect! Having carefully applied my decals it was time to make them all scuffed and damaged. I did apply Army painter Anti-shine to cover the gloss varnish and on some panels Lahmian Medium [as suggested by the guys in the GW tutorials]. I have to say the Lahmian Medium is more effective at matting the gloss finish, it's coverage is also better but there are still areas where the gloss shows through. It's no doubt difficult for the medium to find purchase on the smooth surface but I'm sure it'll be fixed with a subsequent coat or Anti-shine. As for the decal, I have figured out why I'm not 100% convinced - the wonderful tecture created by the Vermilion craft acrylic doesn't show through the decal on the Cog. If this had been hand painted you'd have seen that. I've shaded it a little bit but it's still overly bright white, the scratches came out really well, especially the way the paint looks to have smudged. The litany across the top of the guard is a bit dubious but I do think it looks a little like chains so that scotches any concerns. 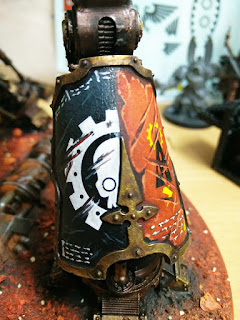 The other side got a bit fiesty. I think I was overzealous on the highlights on the damage, they're a bit too chunky when viewed close-up. Afterwards I felt I'd rushed it and been clumsy but as the previous comments have made me realise I'm being critical because I am looking at it close up. But it has made it more interesting and the damage on the shins would be considerably more given the way it smashes through terrain and stomps on everything, 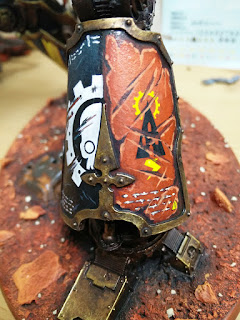 And the damage on the chevrons, ooh! If I can mange to replicate this range of highlights on my Ravenwing I'll be a happy man. I'd toyed with the idea of using the red edges as highlight but went for tints of the top layer of paint. I think that makes some logical sense but I'm sure there could be red in there too as it gouges through the Red Oxide Primer the knight is coated in. 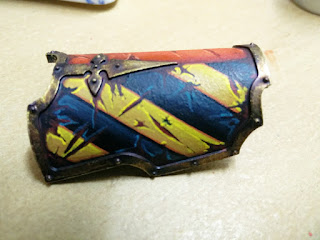 Chest plates also got damaged up. I'm still wishing there were more markings and bits on it but I don't know what so this is it and I'm really happy with the result. 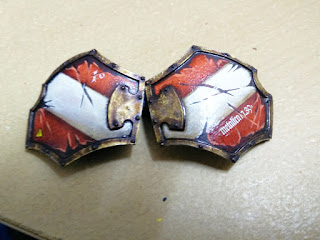 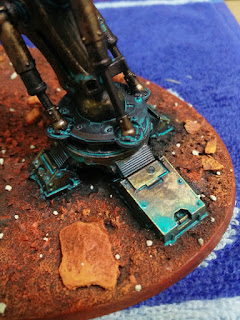 The is was still wet and I've added more Turquoise in those hollowed areas. I see this as a central core with another metal forged around it so some areas weather quicker than the rest. 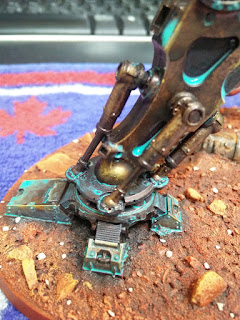 And more weathering, the entire lower section is done now and I was particularly judicious on the pelvic region. I went from a thinned turquoise to drybrushing and I really like it. 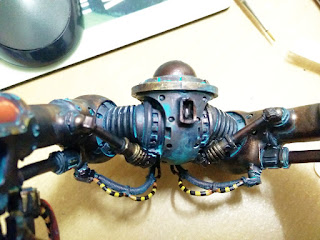 Until it gets covered up by the groin guard! That still needs the edges weathering though, but it is glued on! That's right I'm starting to actually add pieces together. 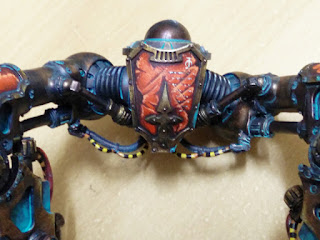 But you can still make out some of the great patina I'd created. The hip joints are less weathered just because I thought I'd done a pretty good job on the metallics and wanted to retain as much of that texture as possible. 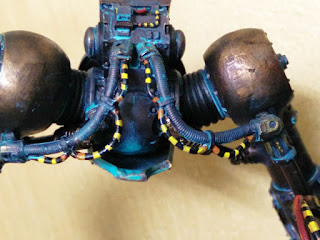 So, it's all coming together now, a little more battle damage on the carapace and fist. then it's lighting FX on the lance, eyes and plasma areas. Then varnishing and some extra details on the base and umm and ahh about the missing banners...