It was April when I last put some concerted effort into my Azrael conversion from the Dark Vengeance Captain Balthasar model and this horrific close-up picture might explain why. Essentially I'd painted his face a number of times, been happy and then cocked up the eyes, then tried again and failed. The teeth too, went all kinds of wrong so he got parked and I've not looked at him since, well not in a kind way that motivated me to paint him but often in disgust and dread that I had to fix him eventually. But really theres just the face, the sword, the name on the banner and a few tweaks here and there and this guy is done -  a nights work at the very least and he's on my To Do List too! 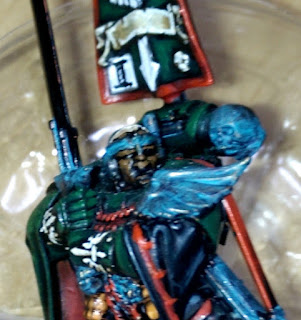 And so I did! I spent the night fixing his face, the eyes and teeth being the main thing but also doing his sword. 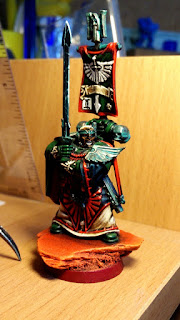 I'd managed to get some quite subtle blends on the black blade of the sword then put some striations on it similar to those on my Tyranid Boneswords [I've just realised my Boneswords ARE black and I did Old One Eye's skeleton black too, I knew I was right doing that]. I hadn't planned to do them similar and they've created a bit of a pattern that I never intended - too many Xs in my opinion but overall I'm happy, nearly done. 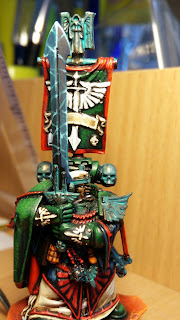 All I need to do now is the name on the banner. But while I was doing it I also decided to push on with my Assault on Black Reach commander who was ironically supposed to be the 4th Company Master who is Balthasar, which is the Dark Vengeance commander! Anyway, he only needed to tweak the banner and as there was no way to fit Balthasar on that scroll I decided it was a Vraks cmapign banner, still struggled to fit the lettering in, not my best freehand and the legion numbers well ropey, but at least changing the scroll to black was an improvement. Now all I need to decide is whether to add a little red stripe on the bottom of the cloak to tie him in with Azrael above... 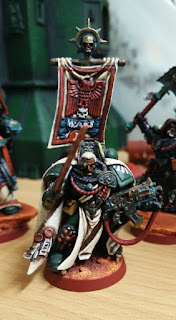