It doesn't look like I ever rewarded this model with a post of it's own, it just got lumped in with other projects I was working on simultaneously. Well with the Knight at a 'save point' it was time to overcome the inertia on this project. Stumbling blocks were fundamentally magnets. It's always problematic but so worth it. There are tutorial online of course to help [often I still find it hard], the one I first printed out was from the eternal wargamer but Michael Corr has an equally detailed one over at St Andrews Wargaming and obviously I put my own spin on in it. Really my method was just fill it with Milliput and drill out holes at me leisure. I did the underwing mounts and the nose cannon that way. Putting the milliput into whatever holes, then gluing the wepon mounts in place, which squashed the putty. Then using the weapons, pre-dipped in water and squashing them gently - providing a perfect surface to drill into for my magnets when the Milliput cures. I'm still not sure about the targeter/heavy bolter mounts either side of the nose. Mike said they're too hard to swap so it's a blocker to overcome. 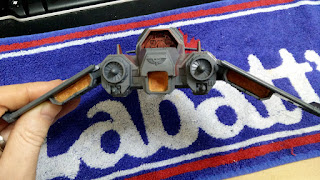 The top of the jetfighter, I just glued in some sprue and attached a magnet. 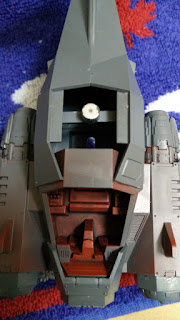 I then filled the two tops with Milliput and pressed it into place until I got an impression of the magnet. This means I can easily align it perfectly to fit the one in the fuselage. 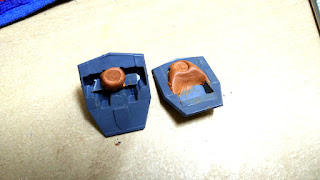 I also prepared the Rift Cannon extension that will allow the magnet to butt up against the Milliput in the nose. 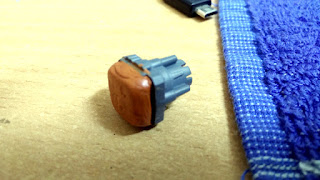 So magnets go in next and I just have to decide what to do about the targeter/heavy bolter mounts either side of the nose and whether to magnetise the hover jets/ammo covers. When I first got this I never expected to make the Dark Talon, the Jetfigther was a better prospect but magnetising for variety is so worthwhile. Now the Dark Talon is considerably better  but I'm not 100% wedded to representing all things through magnets I just need to decide which options I can live with glued in place, what would you do?
Posted by 40kaddict at 12:27