The fires of the Ferron forges glow hot as I return to the Knight that started it all. The original plan was to build this and the Cerastus at the same time, reach certain milestones together and end up with two knights at the end. However, I had quite a number of other projects on the go at the same time so when I began to focus my efforts the Paladin fell by the wayside. Annoyingly the only real reason it was abandoned was the basing of the model and potentially repositioning the legs. I wanted something a little different but I didn’t think I was prepared to cut the legs up just yet. But when I revisited it, having completed the Cerastus, the planets aligned for me to overcome that stumbling block. The solution was just one cut, albeit quite an awkward one - I had to remove the hip joint pipes. This would have been so much easier if I’d done it before joining the two parts together but y’know hindsight. Anyway, I managed it and still have all my fingers and eyes. 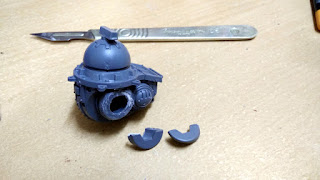 With the pipework removed I can now rotate it around the groin. It locks into the leg with a hexagonal plug and socket, obviously those could have been cut off but I’m already reducing the structural integrity by slicing the joint off. 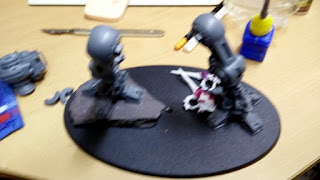 This way I could rotate the joint so although the leg is still in a similar position as before because the pipework is not pointing downwards and more forwards it'll at least gives the impression it’s advancing. If I point the body the other way it'd be more apparent I think, but it's removable anyway so that's not a problem. 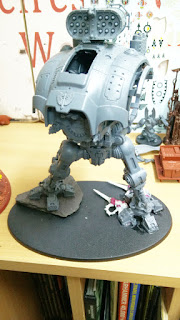 I had another spare Termagant, again missing a head so a bit of judicious pruning, some spare bits of Genestealer node tentacles and lashing of poly cement and I managed to squish the two under it’s foot. My kit-bashing is always a bit slap-dash, I could probably do a better job but I’m all for using just glue and spare bits of sprue to fill in gaps and for the most part I get away with it. 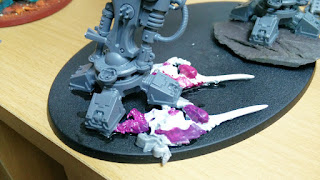 I’m going to struggle a bit with putting the basing material on but I’d done a fair bit that night, it’d had got to midnight and then I had a second wind and think I went on for another hour or more because I knew that if I cracked this there was only magnetising the weaponry that could slow me down. So I glued everything together - Superglued the other foot to the slate, which had been hot glued to the base. I'm a little anxious there are no screws fixing it but there isn't quite the surface to drill into and I think a plastic weld is pretty strong and the model is much lighter than the Cerastus so will be under less stress. 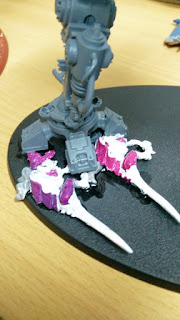 I think this picture shows best how the rotation of the hip joint can be subtley effective. to be honest I only realised above that although it was rotated the leg was essentially in the same postion. It is tilted a bit because of the gaunts underfoot and the fact the joint was separated it made it easier to position, it only needed the torso to be in place to add a bit of weight to ensure the joint and waist lined up correctly. 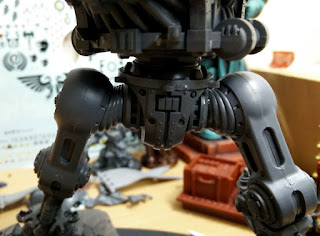 The only thing that annoyed me was I just realised I'd planned to try out the Paladin Torso on the Cerastus and vice versa, just to see what they looked like but forgot all about it and now it's too late. I have had them stood together and there is still a small part of me that regrets that the braced pose of the Cerastus loses a lot of height that differentiates it from the Paladin. It's still bigger it's just not as big, not to worry the dynamism of the pose more than makes up for it. Anyway, the Paladin needs basing yet and then I need to follow Alex's magnetising a Knight tutorial so I'm not beset by further hurdles to overcome.