17 blog posts in and these are the last pictures I've taken before the Lancer is offically 'To Done'. I've mentioned there will be a banner and I may well add some purity seals here and there, maybe as awards for impressive feats on the battlefield but essentially after these pics the Lancer is complete. 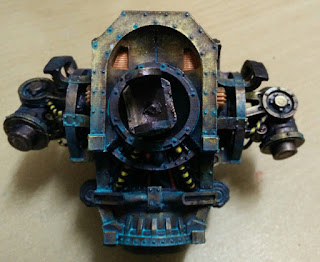 These two shots show some extra orange that's been added to the 'hot' areas, it's really helped the OSL look more like what I was after. I've hardly used any yellow in these areas as I wanted it to be clearly orange and the objective force field barriers came up too yellow, so that was definitely a lesson learned. 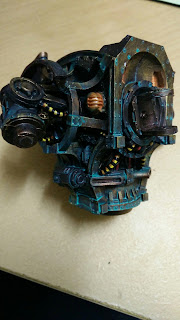 The chest plates have now been glued in place, I love what I managed to do with it, much more reserved with the damage than elsewhere. A little annoyed that the left panel [as you look at it] is slightly higher up which makes the white stripe not mirror with the right as well as it should. Super critical but when you take pains to do something right and then find out the positioning negates that effort... 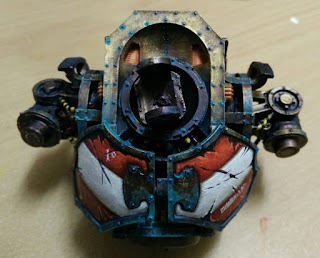 I do love what I achieved here and that I decided to do mirrored stripes as it was not the original intent but a decision well made. However, sculpt wise I do find it bulkier than I would like. Obviously you can choose not to put these on but that was never going to happen. I just think they could have been tailored [literally], perhaps the under arm areas trimmed down a bit, to make the torso more lithe as it appears a little top heavy now. But the armour is there to protect so without it would make little sense [although you could say that about a lot of the 40k universe]. Alternatively they could create 'force' armour similar to the gauntlet shield with emitters built into the ribbing. That would allow you to keep the athletic nature of the Lancer, echo the gauntlet shield and also still see the amazing detail underneath the armour plates, it'd be very mechanicum too.

The eyes on the Lancer are tiny, I think I did a great job on them but being so small it's very difficult to see them but they're definitely up to/beyond my expectation. 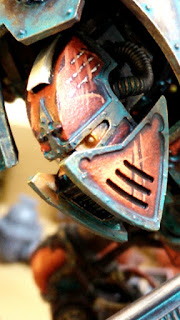 I have been able to fix the lance OSL, it's nothing fancy, I just managed to smooth the transitions and reach a glowing point. I think I could include some 'lightning' effects over the top of it to make it a little more interesting but for the time being I'm happy to leave it as is. I've cogitated, deliberated and agonised for months on this and I need to say 'To Done!' and move on to something new, else I'll make mistakes that don't need to be made. 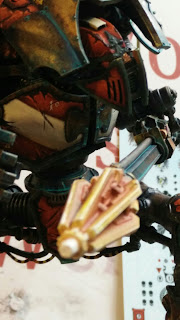 This has been a really great project, I've loved all the comments and support throughout and I'm glad so many of you have persevered with the lengthy process [like you've any other option ;) ]. I should have the final pictures taken soons, so look forward to that but the big question is - what's next...?