Whilst bemoaning my lack of a decent macro function on phone I realised I should do something about it and found a macro/micro camera app that's achieved these detailed shots. I'm really impressed as the lighting is OK too, no filters to force legibility. I've battle damaged the carapace, so all the weathering is now done and it'll be lighting effects next. I did far more damage than I'd intended, just got carried away. I expected there to be less on top as this is a big guy and folk won't be able to get up top; so who is scratching and damaging the carapace? Well clearly someone much bigger so I'll have to work that out at some point 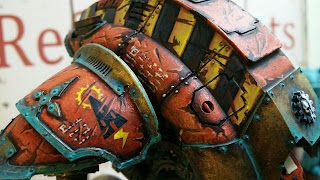 I added some more verdigris on the feet, which I think works really well now. I will have to debate whether to apply Secret Weapon miniatures weathering powders. I always imagined this thing kicking up a lot of dust but having covered a lot of the textured metallics with interesting patina am I really about to then cover the patina AND metallics with red and orange dust? 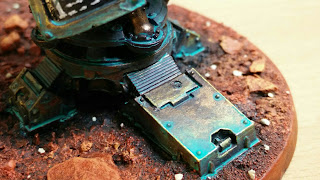 The OSL has started to go on and although I'm quite chuffed with the radial pieces I'm less convinced of the central white area. I'm trying inverse highlights [sort of ] as per Dan Grundy's suggestion and it's definitely working in some places. 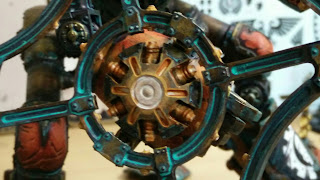 But it's hit and miss in others, like the rear view illustrates here, the butt generator looks cool but the back power plants a bit suspect. I'll try and put some more orange into it to rescue it and the eye lenses also need doing.

Having used Mecharius Solar orange for the initial glow I was really impressed how it washed over the model but wished I'd added white to the glow area first as the paint left exposed bronze areas underneath which were dark instead of light. So I then applied white hoping the next highlight wash of pumpkin would fix it, sadly I was wrong as you can see on the two examples on the left and middle, whereas the right vent is a little more what I was after. Still, I'm undaunted and think I can fix it. 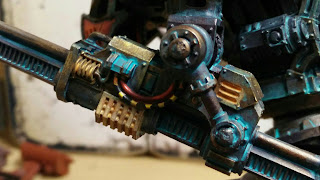 The lance tip is seriously stuffed though, fixable but I've pretty much covered all my patina texture and it looks less like a glowing super-heated electric shock lance as some rusty spoon covered in Korma sauce! 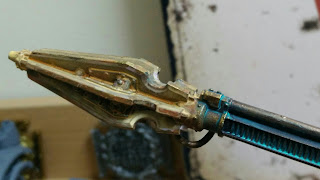 Have no fear, I'll fix it though and to be positive despite this set back is an achievement in itself. It's really close to completion now and as I'd flitted between a lot of projects initially and then focused primarily on this I'll have to start looking at some of those other projects to take forward as a group again and then find my focus or choose a project and deliver it or just start something new for the giggles. Another decision but it's one I'll easily resolve once the knight is done.