Having organised what projects I have going forward I've structured a plan of action, specific short term goals so I can keep a lot of plates spinning before the 'focus' hits. Getting the knight fully magnetised, based and undercoated is that first goal, before I move onto something else then hopefully cycle back around to basecoats etc. So I went back to Alex's magnetising a Knight tutorial as I figured he'd already looked at siph-horridus on weemen's and the Codex Imperialis guide and potentially improved the process and in turn I could put my spin on things. The great thing was that in the midst of doing it you can immediately see what's going to work for you and what's not. I decided the battle cannon melta swap would be through packing out the barrels with Milliput. I was in the process of doing the ammo feed swap but realised I really didn't care enough about it, and just glued the hopper on, giving me the melta fuel tanks as a separate bit I can use on a base or something. Should I ever get another Knight I'll do the opposite for variety.

And for the most part that's the only magnetising I needed to do as I suddenly figured out a swap method for the arms. Alex had already evolved the waist joint from siph's process, he cut notches either side so his sprue attachment could slot in like lock and key. So I just expanded that to all my arm weaponry. The two shoulder mounts had their connecting rims all trimmed back to form two ridges and all the weapons had two notches taken out. Now it can be fiddly fitting them in as I did the notches left to right, meaning the weapons are rotated 90 degrees to fit them in and the length of the barrels is a little awkward, although even if it was front to back I think there'd be the same problem... however, because the torso is detachable it's not impossible to weaponise it while separated and then combine the top and bottom. The resulting join is not as flush as magnets, the weapons all have bits that prevent it looking as neast as I'd prefer [Alex trims those off in this guide] but, because this is essentially a 'friction' fit I'm not about to remove parts that make the arms stay in place. Better to have an imperfect posable model than a perfect model whose pose keeps slipping. 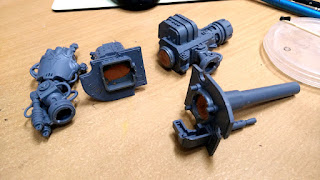 I've still to sort out the stubber, ion shield and melta and there are a number of pistons that need to be added which will lock in some weapon poses but not sufficient that I feel that I've lost some posability. You can definitely see though that the alignment of the torso with my subtle change in the legs makes this look far more dynamic than it usually does. 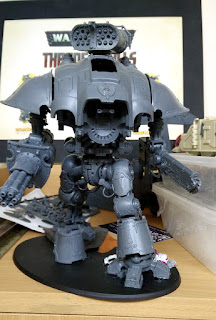 Having done all of that I also based the knight, I didn't take any pictures, its only sand and glue afterall. I'd later discover that the very fine sand in my mix is making the base look quite odd - the sand sets in a solid mass, obscuring the medium sized pieces I spent a long time sifting out of my big bag of sand. It also creates little dimples where some of the PVA dries quicker and the surface tension leaves a little 'mole hole'. It did the smae on the Cerastus and I was going to put things growing out of them but thought better of it.

Anyway, having seen the result I added another layer of PVA over the suspect areas and re-applied the medium sized sand, which seem to have solved the problem. But even the first application was sufficient to make me feel a thrill of success. Every time I ran it through my head that I'd actually based the model, the perceived obstacle for it being sat on the shelf for 5 months, I literally felt like Sheldon in the Big Bang [below].


Now if that's not signs of addiction I don't know what is and as mentioned in some of my recent comments it's both amazing and just a little scary that it's happening but also that just by thinking about it I can feel that same sense of satisfaction at will! It's like having a little endorphin tap. But that's possibly just me as that door swings both ways and there are plenty of things that nag at me relentlessly that can suck all the life out of my hobby vibe. Still, I'm feeling good about all this so best not look a gift-horse in the mouth :)