Wargames ...shall we play a game

A while back I came across a Kickstarter campaign by a guy wanting to open a new gaming centre/shop. If I'm honest I didn't really follow what was going in the campaign but I kept on seeing bits and bobs about it and as things progressed it looked set to become a reality. I'm not sure at which point I suddenly realised this new venue would be opening in Southport, a 15 minute drive from where I live but as progress in the shop was being shared I got a little bit excited. The other week Wargames officially opened and the weekend after, having just watched Star Wars, I decided to take the kids to have a look. I'd noticed there hadn't been any pictures of the shop online since it had been opened and the impresison I got beforehand was that it was pretty big and I was not wrong. The pictures don't really convey the size sadly but there is about 5 or 6 tables set up with room for another 8 or so... downstairs! And there is going to be three floors, with purely gaming on the upper two. There's a mix of products available and my eldest was particularly interested in the Batman Skirkish game, he's already planning on spending Christmas money on it! 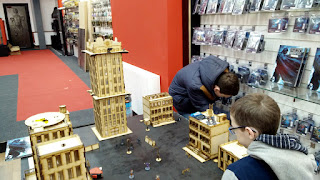 Nothing was priced up yet but friends have confirmed it is indeed offering saving on standard GW products, what that will do to the Southport GW time will tell. The problem for them is they're set up primarily as a hobby space which has allowed parents to leave their kids, go shopping and come back. Whereas Wargames has a cafe, comfy seating, presumably a toilet and in the new year they'll even have an alcohol licence for the upper floors! Add in the fact it has more than just GW product, and room to game [which I believe will be pay-to-play as I recall that was some part of the Kickstarter campaign where you got a membership option for cheaper games], this shop could be the go-to place for hobbyists. I spoke to the owner and he was really cool, so I hope it's a success for him, I just hope the town can sustain both shops. Not that we get into Souhtport as often as we'd like but as Wargames will stay open until 11:30 it's possible we could attend for a few games and there are plans for tournaments too, and you know we like a tournament. Oh, and they've got battlemats too, as you can see below. I know you can get these online but there's nothing like seeing one in the flesh. 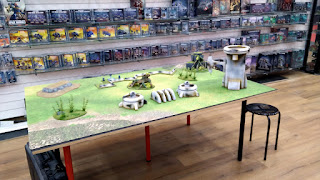 There are also various display cabinets with a number of store armies on display. I was particularly taken by this wee beasty. It really is beginning to grow on me as a model, despite it's convoluted rules. I just can't decide if I'd want it or rather go the Trygon/Tervigon kitbash route that looks so effective for a fraction of the cost. 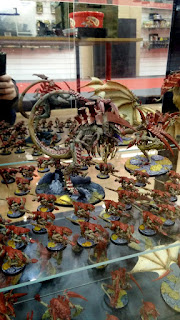 Anyway, just thought I'd share my thoughts, give heads up to what looks like a really good proposition and although they have stuck to the tried and tested 'red and black and white' of your average boys bedroom ;) it's definitely more in keeping with my idea of an open and airy place to venture into, rather than avoid. Good luck to 'em.
Posted by 40kaddict at 12:06