And here's the beginnings of the Google AdSense funded Imperial Knight. Now, as you can see there's a Space Marine in here and Knights don't pilot them but I have some really good fluff in my head about why this is the case and one day I'll be able to put it down on the blog, alongside some cool fluffy images and you will find out about the Shards of Caliban and their impact on Ferron Proxima. It'll also feed into the background behind the Mechanicum Knight order that resides here too, and there involvement with the Ferron Titan Legion. 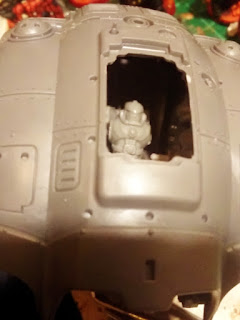 Now I had to do some serious cutting and shaving of his kneepads, legs and waste so this old plastic marine is a shadow of his former self, and you should see him now he's got the shoulder pads in place he looks like a mushroom! Anyway, the throne manages to fit in with easy so I'll paint that separately, I know I should fit out the cockpit but I don't think you'll be able to see half of it once the carapace is on so I'm going to leave it as is and just paint the interior pretty vague. The marine should be black but I'm not sure that'll stand out in the dark confines so I may paint him Bonewhite as if he took the Deathwing reason - white being the colour of the dead and painting themselves as dead men, might fit with the pilots choice to inter himself in this machine. It doesn't quite fit as this guy is Heresy old [hence the reason to go black] but his armour isn't quite Heresy legit so I can do whatever the hell I want. 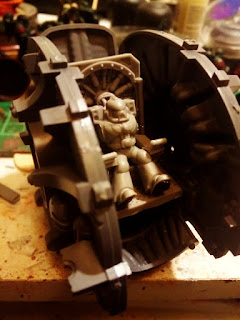 Followed Alex's tutorial on making the legs and body detachable although I may not have shaved down as much of the little stump as I should have, it rotates a little too freely now, I'll probably add some spots of glue in places to try and thicken it up to add some more friction. 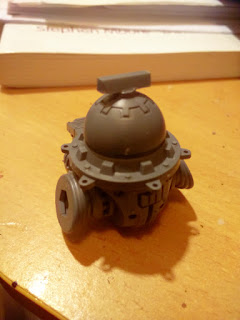 I'll have to look closely at his magnetising tips as I'm at that stage now and keep looking at inferior guides. It's not helped by my choice of magnets, I've some 4.5x3mm and 5.5x3mm magnetix magnets that are super strong. Then I have some tiny 3x1mm magnets that aren't very strong so I'm struggling a bit with the process. 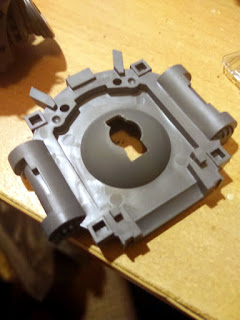 I also wanted to have a slightly dynamic pose and chop the legs a bit but I've got enough obstacles to progress at the moment I really don't want to slow things down.