When we left things yesterday I'd managed to get one board in and hoped to do the second and third in the evening. Unfortunately I didn;t quite meet that target, I prepped the third but decided to leave putting it up as light was starting to go and I din;t think trying to lift it up while a little tired would be condcuive to an incident free installation. So, this was the first bit of insulation, you can see that despite the 150mm depththe staples managed to keep it tidy. 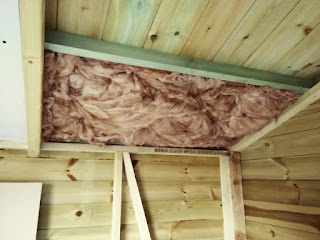 I'm pretty sure the insulaiton properties work best when there are air pockets in it's full 150mm depth but I'm hoping this will still work. You can see the gap on the first board which had to be trimmed out to ensure it would fit. 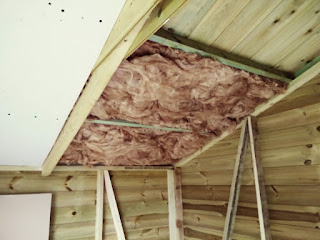 The third insulation piece went up, even with my works heavy duty staple gun there was still problems getting the staples to stick. Admittedly if they fail after it's boarded over I don't care but I need to have it contained enought it doesn't put too much pressure on them so they pop the drywall screws. 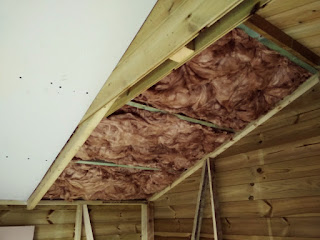 This time I marked on the board where the joists were and then marked where I was going to add the screws. Measuring was nearly perfect. I had one area that snagged in the top right and had to trim the left edge by about 5mm. Unfortunately when it went up I screwed it in place in the  middle then came to do the top right and it had moved to render my trimming completely moot which resulted in a further 5mm wedge int the corner breaking off :( still it's not too bad. 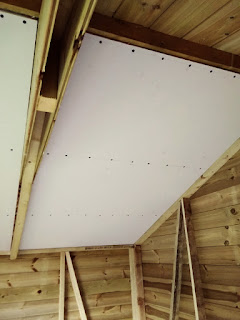 With the second board in place I was going to call it a night but thoguht if I prepped the third board, made the measurements, cuts and ensured it fit then that would speed things on during the next build phase. This prepwork made me plan to measure, cut and ensure the fit of the fourth panel before installing the third next time. The insulation process still sheds a lot fibres. I was stricter with my filter mask this time but prepping the 3rd board without the mask still left me with a cough afterwards. So if I get things ready and then do the insulation at the end of a session I think progress will be smoother and less uncomfortable afterwards. 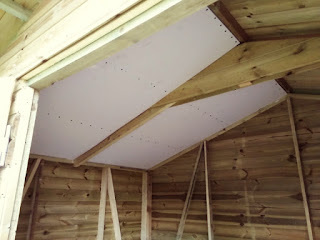 I'm feeling a lot of similarities to the nights I would make the Capillary Tower chitin plates - slow but steady. Even the wife said this is going to take a long time but I'm hopeful this is the hardest bit, certainly ther will be the boards on the left and right wall that just require trimming on the ends and they will slot right on top of each other. The back wall is a little trickier as that thin central beam needs to share two plasterboard ends. However I may add in another 2"x1" so each board end has a good inch to be joined to. Unfortunately that'll mean another trip to the DiY store but I think I need some more bits anyway so it won't be a completely inefficient journey.
Posted by 40kaddict at 12:42