40kaddict Towers - the first board is in.

Full disclosure - I am not a 'handy man'. There si stuff I can do - painting and decorating, small amounts of woodwork and gardening etc. I can wire a plug but most other electrics terrify me but boarding out the shed fits within my capabilities and was cheaper than getting the shed people to do it. Of course I may live to regret that decision, particularly as the cost to insulate the shed is about £150 now and will still rise. So here's some of my materials, I picked up the Earthwool off Gumtree. I'd been searching on Google for paving slabs, to see if I could add that extra foot at the back and this advert for loft insulation came up. £5 a roll, for 150mm thick Earthwool. Now I was looking at specific 50mm stuff from Wickes but it was going to cost around £130 to insulate the shed. So this was a bargain. The only problem was the fact it's three times the thickness of my cavity and clearly the size of the rolls and how they'd fit in my Micra. Anyway, I managed to put 4 in the car, leaving one behind. The fact is I probably only need three rolls to complete the insulatios so its was lucky I didn't get the final one. As you can see I've cut one of the rolls down. I needed a strip about 53cm wide to sit between the ceiling joists so went at it with a saw. You can see it's a pretty tidy cut, surprisingly. The roll is actually perforated, so you can split it into three but the perforations would have been no use in this instance as it's too narrow. 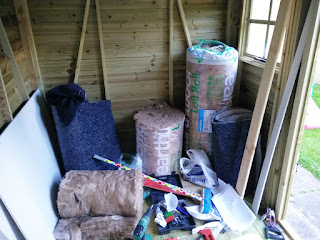 This is the first plasterboard up. All of my boards were 1800mm x 900mm [6' x 3'] because most of the panels were no bigger than this. The 8' x 4's are cheaper in the long run but more importantly heavier and although the cutting is going to be roughly the same lugging these things about, with my back, meant the smaller ones were more convenient. I'd measured the entire internal surface area, did a little illustration and plotted boards on each surface so I new how many to order. I opted for 9.5mm on the ceiling [12.5mm on the wall] as it's lighter and there is a gap between those fascia board on the cross beam of the apex that I hoped to slot the board into. The hoep was the slot would give me some support while I tried to screw the board in place. 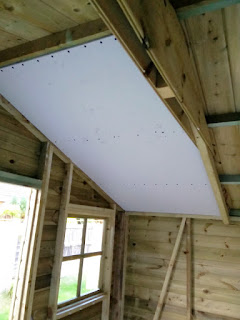 I measured repeatedly and cut the board exactly, using a stanley knife to cut through. Which resulted in a board that just wouldn't fit. It was too snug and even with shaving the fascia board I just couldn't slot it into the gap at the apex. What was worse is that every time I lifted it up I was convinced the plaster was going to fold up and break. I must have had this thing over my head about 20 times and I hadn't even put the insulation in place! One edge did break apart on the left luckily as I had to shave down the sides by about 15mm I removed the worst of it. When it finally slotted into place I could go back to the insulation problem. I'd cut a piece 180cm long to go behind that apex support beam but there was no way I could push 90cm of a rapidly expanding insulation wool [it's compressed in the shrink wrap, hence why I thought I;d get it in the 50mm cavity] through that gap. In the end I cut it in half and tucked one end behind the beam, but there was no way to secure the other end and it kept falling down. Additionally those perforations in the wool came into play and the 50cm wide piece became 35 and 15 wides strips. The end solution was to get out my staple gun and tack it in places. 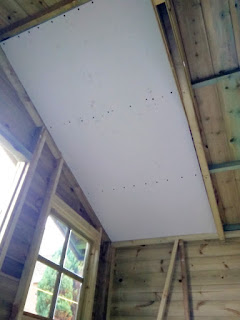 Even pushing as hard as possible the 8mm staples struggled to get through the wool but I managed it and the remaining wool was still quite fluffy and it was clear I'd have no problems containing it behind the board, so stapled up the two remaining pieces. With everything in place I got my eldest to use an old flat headed sponge mop to support one end while I supported the rest and tried to screw into one of the cross beams. I think I got luck in my second attempt and the board held, which made putting the remaining screws in much easier as I didn't have to take all the weight. I probably went overboard on screws but the last thing I want is this dropping on my head. I missed the beams a few times, not sure how to remedy that but it'll be easier in the future as I now know what I'm doing, just hope that the luck I had in the board staying solid thorugh all this fuss doesn't fail me when I'll have less faffing to do next time. I may well put a few less screws in though and then get some flat D shaped beading to then postion above those screws and intersperse some more so it's more secure overall, rather than trust the countersunk heads to the plasterboard... 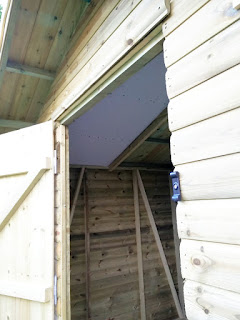 Throughout all this I was weraing a Tyvek suit, to keep the glass fibres away, a filter mask and some protective glases [couldn't find my goggles] even so I kept taking the mask off and the glasses because they got steamed up. Because of that I'm now coughing repeatedly thanks to gettign the fibres in the back of my throat so if you try anything like this with this material DO NOT take away the mask, EVER! Also the Tyvek suit gets really hot, so I took my 'work' jumper off. 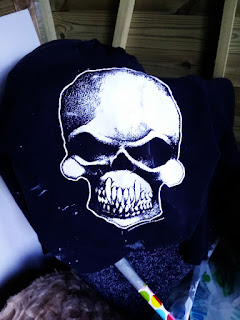 I do absolutely all my 'construction' work in this thing but given it's heritage andreturn to my interest in it's origin I kind of regret it's covered in paint splatter, expanded foam and silicone sealant from 15 years of DIY. 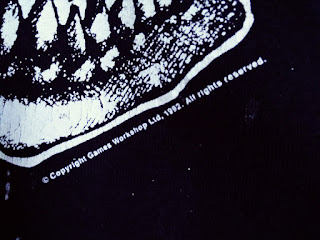 I'm hoping my next attempt will secure two more ceiling panels, this took about 90 minutes to do and I'd had enough by then. It's exhausting holding these boards above your head but this is the most difficult bit and once the side walls go on they should help support it at the edges too, making it impossible to fall down. Overall it was a frustrating but ultimately rewarding first attempt. It's not pretty but the board didn't break, the insulation fit and thereore I was vindicated in going with the cheaper Gumtree gamble and I now know better how to attempt the remaing three quartes of the roof.
Posted by 40kaddict at 13:07