So I obviously left this hanging, indeed that's a Cerastus torso on the left, for a Lancer. My mate Ben donated it for one reason or another and so I've been working in tandem on this with the Errant/Paladin, although actually it's been ticking away for a good few months. In part this was because I lost a piece and had been holding out on the off chance it would resurface. Luckily it did, so I wasn't forced to use a hollowed out 25mm base as the waist joint. 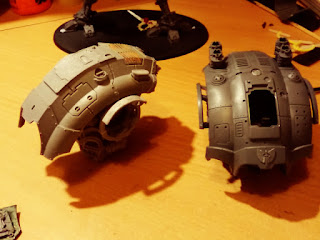 I also utilised some more parts donated by PeteB's absent Space Wolves to make the base a little more interesting. I added ripped up mounting board to make it less flat. I also smoothed in some left over Milliput to try and hide the Space Wolf runes. I want it to look more like an underground pipeline than a buried Fenrisian super gun. 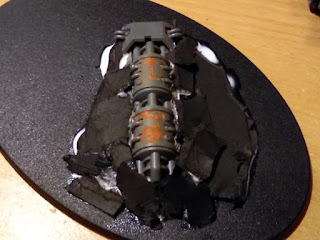 I then used Valejo Red Oxide paste to cover over the mounting board. In truth this was overkill, I probably could have gotten away with PVA and sand or even tile adhesive [I think I still have some about] but it was to hand and I hardly use it so why not? 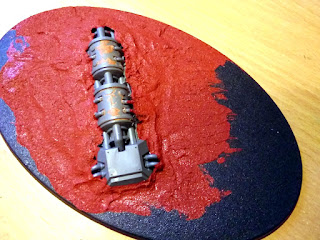 I saw this pose on one of the Forgeworld open day pictures and thought it looked really cool. I suppose with the Lancer you would normally emphasise it's speed but this thing is braced, squatting low, with it's shield raised ready to receive some unG.O.D.ly monstrosity before it Shock Lances it into submission. It's sacrificing height too, because who doesn't want to show off how much taller this is compared with a Paladin. However, quite often when it's upright at full tilt, it looks a little gangly and daft - like a baby giraffe so I think this is a better choice of pose, it's different at the very least [even if it's a copy ;) ]. Once I'd played around with achieving the pose unglued I worked on the feet, given the slope I had to raise the right foot which gave it a bit more dynamism. 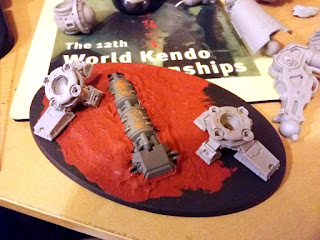 Obviously pinning is an absolute necessity for a model like this. The ankle ball joints came with sprue/vents attached so I could use them as natural pins, just drill out the socket in the foot to accommodate. Then I drilled and dry fit pins in the knees and also the waist. Then I was able to move things around to get the pose right. I made marks in places so I could see where things lined up. Then I super-glued the waist, this made the legs behave like a marionette. I glued the foot sockets and once dry I removed the pins from the knees, separated everything, glued and then rejoined the knees and pins. Or pins and knees...? It was only once everything was dry and solid did I realise my mistake... the pistons from the bottom of the groin have to reach the inside of the thigh.. 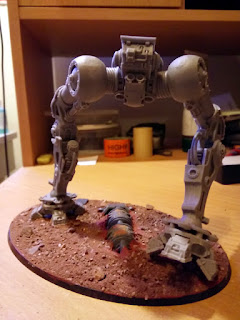 Luckily I was able to shave the ball joints down sufficient to allow the piston [once extended with lollipop stick rods] to join directly to each mounting socket in a straight line. 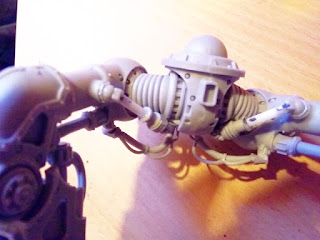 I also failed to take into account the cabling, this required a bath in boiling water so I could reposition the cables. I also forgot that a second dunk doesn't allow more pliability it just reminds the cable what it's original shape was and reforms that. 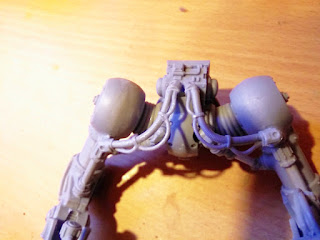 I did snap one of the thinner cables in the process as it was such an extreme reshape, but some super glue gel has repaired the break. 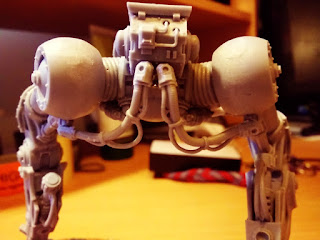 There was a whole lot of progress in one night and without having all the armament options as the Errant/Paladin progress will be much swifter on this so it's become my focus for the last few nights.