I spent most of last week on the scouts, you'll be pleased to know they're finished now, I'll get chance to do their completed pics this weekend. In the mean time most of my WiP pictures are of their camo cloaks I'll be posting these over the next few days with the big reveal of the finished models next week as progress on the Tac squad will be slow going. Anyway I did my usual highlighting procedure for the cloaks, matching how I do the highlighting for the Red Planet base, these are supposed to match the surroundings afterall. 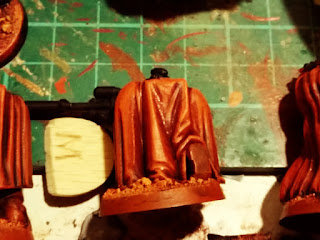 Funnily enough the vermilion texture on the cloaks didn't catch as much as I thought it would with the highlights, but no bother because I'll be adding my own Ferron Camo pattern. I'm actually a little worried as these came out really well and I haven't attempted this technique in about 19 years and not on cloaks! I really don't want to screw up what's turned out quite nice. 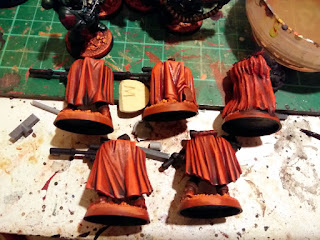 However, I will be repeating the urban camo effect I did on my War Griffons titan carapace. As you can see the majority is just basic grey with a slightly stippled effect and then random shapes with some lighter and some darker.

I'll be adjusting it slightly so the lighter shapes will all be bonewhite [obviously] and they'll be smaller polygons, to better represent the Wraithbone chips on the Surface of Ferron Proxima. Then I will do the darker polygons as black, just for some variety. I think a darker red wouldn;t show up as much so hopefully the extreme will work.
Posted by 40kaddict at 12:18