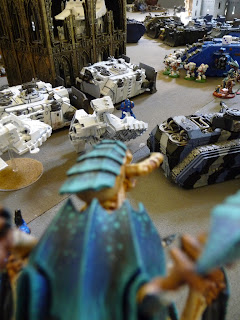 Once again due to the unique way of preparing these posts in advance I have stumbled on a new problem. I still have battle reports for 5th Edition while I'm exploring new 6th Editon so I hope you don't mind having to straddle the two rule-sets to enjoy what went down. For one you've no choice and for two I'm not about to dump the content. This was my final 5th Edition battle, a 25,000pt Apocalypse War, before 5th went off and  expired quietly in a corner somewhere.

Here come the Stealers! Both units of Adrenal Stealers came on and the Ymgarls woke from dormancy in the building complex top left. The Stealers and the broodlords multi-assaulted the three Whirlwinds and the deathstrike missile launcher, the Ymgarls went for the Techpriest and the bombard. 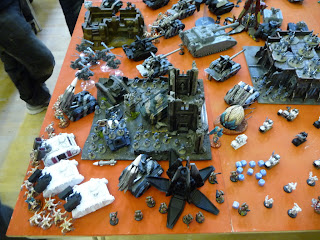 The Doom of Malantai emerged from the spore pod and sucked the life out of varied bikers and guardsmen but quite a few managed their cover saves from this life sucking psychic ability [don't even get me started on that nonsense!] 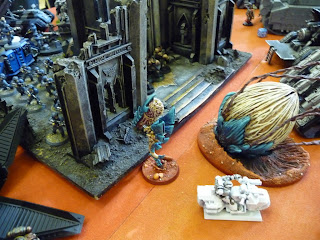 In the lower corner the bulk of the nids suddenly faced a group of outflanking White Scars but the Trygon looked on hungrily, meanwhile the IG heavy Weapons team are no longer a threat. The Tervigon must have spawned the 10 Termagants next to it. 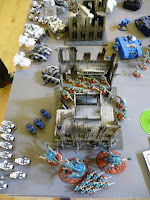 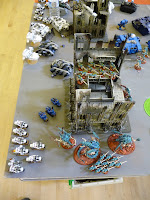 The stealers survey their carnage, all three Whirlwinds wrecked or blown to smithereens, the Deathstrike Missile Launcher gone as was the Bombard and Techpriest, allowing the Ymgarls to consolidate back into the terrain they'd lain dormant in. BOOM! 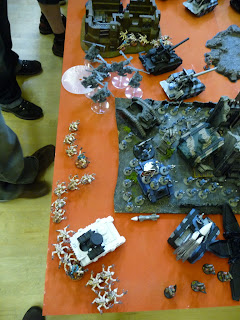 The Trygon licked it's lips having eaten all the White Scars bikers with the Hive Tyrant but their frenzied attack caught the attention of the Imperial Guard tanks. 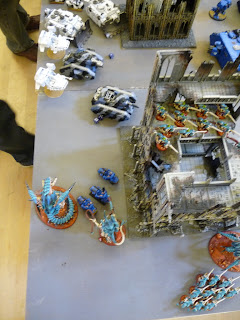 The Leman Russ trained its weapons on the Hive Tyrant and blasted it out of existence. Meanwhile the Devgaunts were rooted out of the ruins and more assault marines came on and charged the Termagants and Tervigon. My disrupter beacon continued to play merry havoc with all deep striking units, not least Belial and his attendant Deathwing who ended up perched on the first story of a building in the middle of the battlefield with nothing to shoot and nowhere to go. 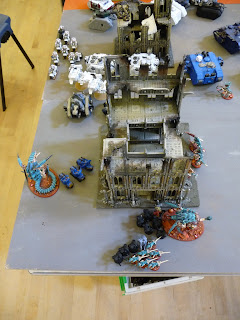 In retaliation for the death of the Hive Tyrant the Trygon smashed the Leman Russ to pieces while the Hive Guard shot their Impaler Cannons round corners to destroy one land Speeder and wing another. 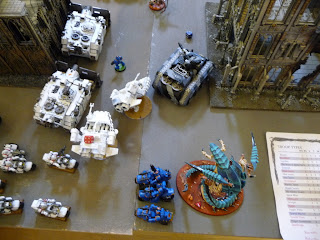 The Trygon looked on hungry for it's next target. 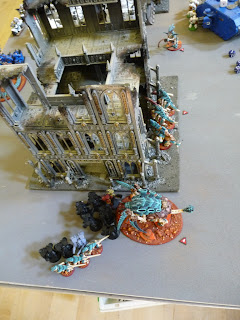 While the Hive Guard and Biovore continued to take cover from the ruins safe in their ability to fire indirectly. 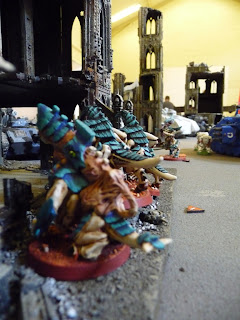 The battle in full flow, you can just make out Belials Deathwing on the building middle left above the yellow tape measure. Also of note is the White Scar Drop Pod dead centre of the board sandwiched between the ruin and the Fortress of Redemption. This catastrophic miscalculation due to disruptor beacon interference had essentially car parked the entire Imperial Guard frontal assault which was aiming to drive through this choke point. I was beginning to feel extremely mean about my asset at this point. One other point to make is the missing Warlord Carapace, don't worry it was OK, just kept falling off and it was deemed safer to leave it off. 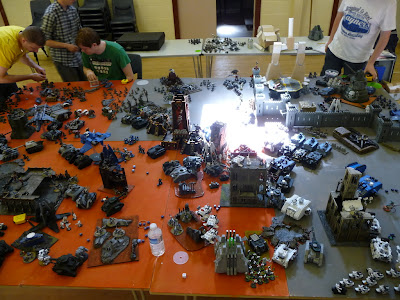 And here comes the pain, Vendettas swooped in offloading dedicated verteran Xeno purge teams with their many flamers incinerated every Genestealer in sight around the two wrecked Whirlwinds and bruning the Ymgarls out of their hibernation spots. 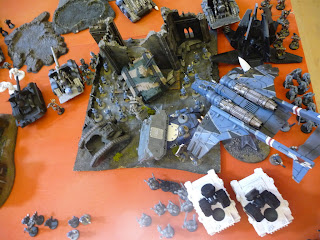 And that was it for me, time to leave. I have to say this was the most fun Apocalypse game I've ever had. My little force did a lot of damage and went out with a blaze of glory. The fact outflankers will no longer be able to do damage in the way my Stealer just decimated the back field is sad but what a finale! Not to mention the giddy fun but eventual apologetic annoyance my disruptor beacon made to the entire game. What a blast!
Posted by 40kaddict at 12:30