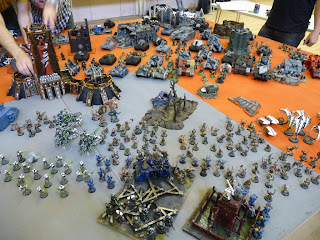 Once again due to the unique way of preparing these posts in advance I have stumbled on a new problem. I still have battle reports for 5th Edition while I'm exploring new 6th Edition so I hope you don't mind having to straddle the two rule-sets to enjoy what went down. For one you've no choice and for two I'm not about to dump the content. This was my final 5th Edition battle, a 25,000pt Apocalypse War, before 5th went off and  expired quietly in a corner somewhere.

I hadn't had much intention to go to the Apocalypse battle at my local friendly neighbourhood gaming club but the wife was amenable so I thought why not. I'd also heard another of my old gaming buddies may turn up, he has around 13,000pts of 'nids which would have been fun, but alas didn't come to pass. Anyway when I got there the 'axis of good was in the process of setting up their 25,000pts. As you can see the setup was vanguard strike, although that's it's 6th name, not sure if it was the same in 5th. Just for context those are 2'x4' panels making a 12'x8' battlefield. Also I think some of the pics are a little out of chronology but I don't think it'll be too bad as I'm only really covering what happened to me, too much was going on to cover the entire battle. 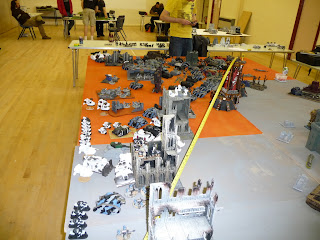 I asked if there was room for my 2,000 pts of 'nids and the 'axis of evil' who were still to setup had only brought 23,000pts so how perfect was that to allow my force to balance the sides? I would also get to choose a strategic asset. I had a quick look at the variety of little doodads you can choose to disrupt, enhance or delay your opponents. In the end, having seen the masses of drop pods waiting to come in I chose a 'disruptor beacon' it was cited just to the right of the Honoured Imperium statue in the picture above. This little device means anything that deep strikes within 48" of the beacon can be repositioned by me anywhere else on the battlefield on a 4+ [what's the symbol for evil grin smilie]. 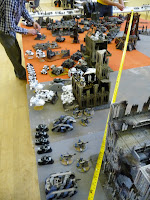 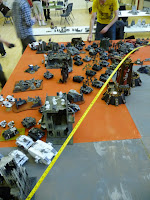 This is the evil deployment, Necrons, Orks, some Marines, some Chaos and the bulk of my 'nids in this lower corner, Hive Guard and Warriors skulking behind the Land Raider for cover. Yes, that's a Warlord Titan on the right, sadly he kept falling apart but it did add to the drama when his torso would randomly crash forwards, if only that had been when he was shot. Dan standing in the background from the goodies, he had Dark Angel's. 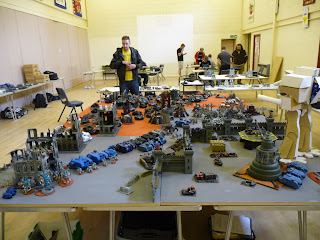 My deployment in the lower corner - Devgaunts in the building, Hive Tyrant, Hormies, Tervigon and Trygon, the Warriors and Hive Guard behind the two Land Raiders. The remaining two broods of Adrenal stealers and a unit of Ymgarls ready to outflank in the very top left corner, hopefully, where there was an  awful lot of artillery. Lastly the Doom of Malantai in a Mycetic Spore... 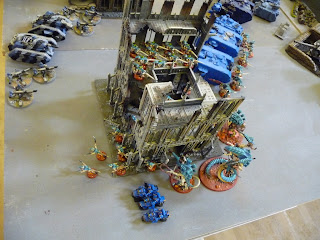 The goodies were predominantly Space Marines - Dan and Rob's White Scars and Roy's Imperial Guard. As you can see the board was pretty packed and it soon became apparent that trying to move units to the centre of the board was a challenge - we needed some of those WW2 deployment map sticks you see in the films! 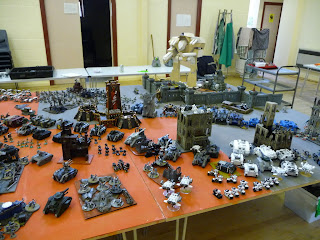 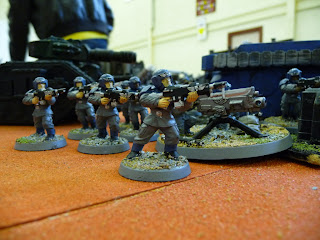 A unit of White Scar bikers that ended up facing my nids in the lower corner shortly after I'd finished deployment. Roy on the left, Dan next to him and Tom our Necron general on the right. 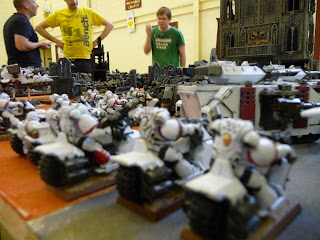 Another of Roy's heavy weapons teams, and what they'll be aiming at. 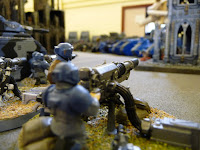 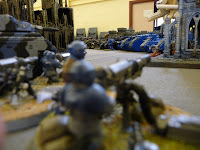 My Monstrous Creatures tower over an allied unit of Space Marine bikers. 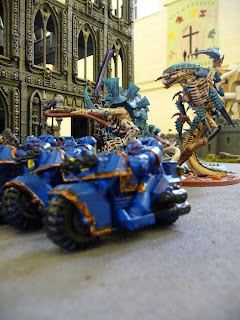 The combined evil infantry at the bottom pic, Necrons and a lot of 'counts as' Orks face off against the many tanks of both the Space marines and the Imperial Guard. 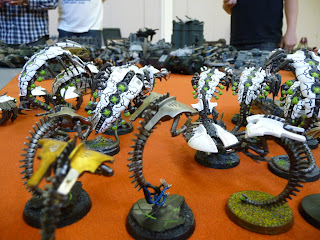 The awesome 'counts as' orks [or so I believe], everyone different 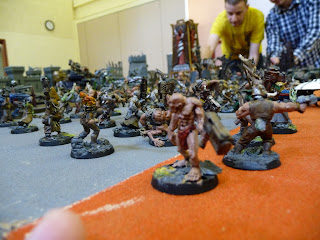 More of our infantry. 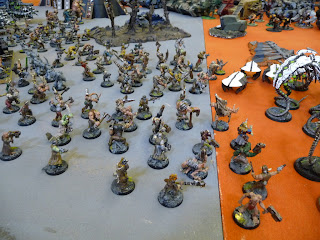 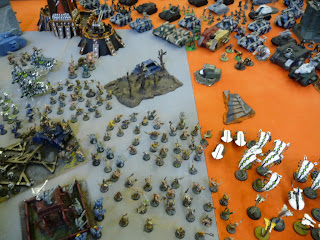 KABOOM! Not so much a pie plate as a serving platter. So when I decided to put my Warriors and Hive guard behind the two land Raiders for cover why did I not realise that given their 'alpha mech' status they would be a primary target for the goodies. Rob had three Vindicators that could combine their firepower into on massive blast template - covering the two Land Raiders and my 'nids. 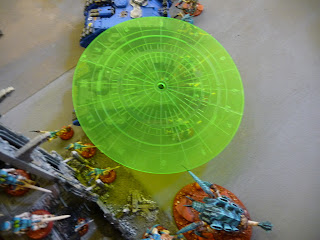 Here's Rob's Vindicators taking aim, not to mention the assorted other vehicles keen to face down the 'deluded' blue marines. 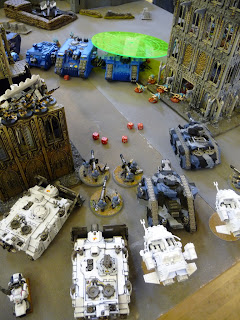 Ouch, the Land Raider was toast, the Vindicator on the right also was down, but luckily for me I came out of with one wound on the Hive Guard a Warrior down and a few wounds on the remaining brood, it could have been so much worse. 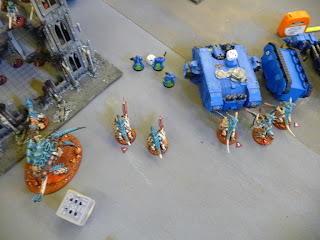 First contact for me, a unit of Assault Marines target the Hormagaunts who suffer terrible loses despite holding onto the cover they were in. 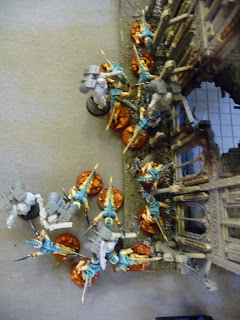 The Assault Marines wipe through the Hormagaunts and consolidate into the building hunting the Devgaunts on the third floor. 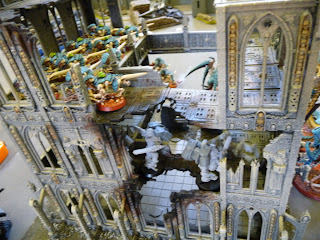 So I'd lost the Hormies and taken wounds on my core units but amongst all of this the disruptor beacon was paying dividends by the score. With tunnel strategic assets around the feet of our Warlord Titan and main objective drop pods, teleporting Terminators and assault units all tried to secure a foothold in out deployment area but over half of them had their co-ordinates disrupted and I got to move them back to their own defensive positions. I actually felt sad about this in the end but they weren't too far from their own objective so there was still some good they could do in the battle.

Anyway, more to come too much for one post alone...