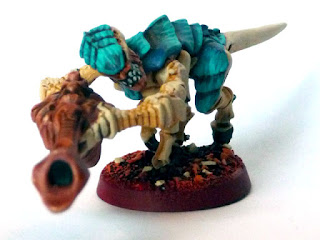 I just checked BoLS as I do at stupid o'clock most nights when I should just go to bed instead, which had a rumour repost from Faeit 212, here's the original post.

Exciting news that the Tyranids will get their Harpy and a Mycetic Spore [though it'll need something pretty dramatic to tempt me to buy one]. More interesting is the 'Harrier' model named and new Tyranid Warriors, lets hope that means they'll come with wings to make Shrikes. Additionally repositioning the Pyrovore as anti-aircraft dunno how that's supposed to work but I guess that's about the biggest U-turn you will see GW do without actually admitting they made an awesome figure but saddled it with really bad rules.

I'll gloss over the Dark Angel Codex being pushed back until April 2013, which means it can be pushed back again nearer the time, because if you glanced at GW's Annual Report you will see they are committed to releasing something every month which I feel is exciting for all. However, the other really exciting thing is a summer release for Blood Bowl! Lets hope I've painted those figures by then, although there'll probably be some pretty awesome plastic miniatures in the box so that should be another thing I want to paint. Put me down for a box regardless.
Posted by 40kaddict at 22:56