With the preliminary basing of one Knight out of the way I felt sated enough I could try and move these closer to completion. I did all the obsidian weaponry and highlighted the leather on hilts and kilts. 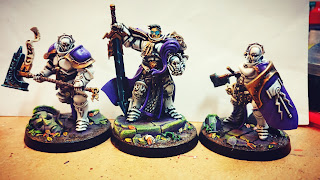 I also did the obligatory glowing eyes with some dubious results. Then I added some battle-damage to the armour which I was even less pleased about. It doesn't look quite as bad in this picture but I thought it was too harsh and spoiled the prisitine look. 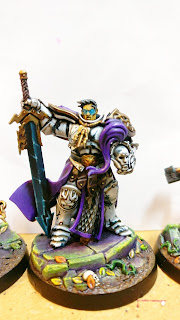 But these guys will have been in Shadespire for eons, brand new armour isn't an option so with one damaged and two undamaged I had a choice - fix the damaged one or push on through with the other two... 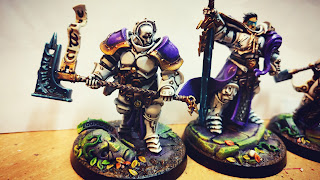 And I went for damage, this time with Skavenblight Dinge and used a sponge for more randomness. I think it was the right decision, although the execution was better this time it was still not quite right. however, better to try and fail [slightly] than to take the easy route.

I also added the [other] obligatory verdigris on the armour, some extra highlights and a little white stripe on his cloak. 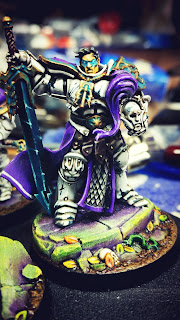