I had alluded to the fact I might subscribe to Warhammer Conquest, but that was pre-release and some website called newsstand had subscriptions at £3.45 an issue! That offer has subsequently disappeared. Even so issue 1 was a 'no brainer', as everyone and their dog was calling it. However, securing a copy in the recognised backwaters of Manchester was quite the challenge. Not a single newsagent or supermarket 'express' had one. My better half also tried the big supermarkets in Southport, again to no avail. Ultimately I had to actually go to GW itself and I was surprised they had copies left. I only really wanted the one copy, although two would have made a Kill Team I suppose. But this is the justification of why Primaris Marines just aren't going to work for me! 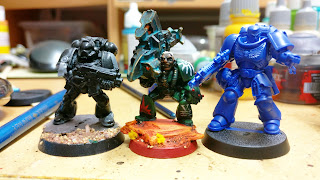 I mean the old skool Rogue Trader era miniatures are literaly miniatures next to it. It's almost like I'm running Squats! Sure the Missile Launcher makes the model as tall as the Primaris but even next to the Battle for Macragge push-fit model he's dinky. Don't get me wrong, the quality of the Primaris models are exceptional and looking at that Tooth and Claw Intercessor sprue next to the Genestealer sprue it's equally comical and impressive what Citadel can do with injection moulding nowadays. 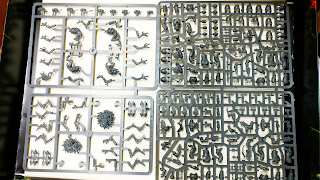 So I'm not sure I can take Primaris Marines with my Dark Angels, even though Hellblasters are where it's at and fluffy with their Plasma. That said I could go successor or a different chapter but honestly I don't want another faction. No doubt I'll paint them at some point but for now I just thought I'd illustrate my long held belief.
Posted by 40kaddict at 12:21