My first Blog Wars was Blog Wars 6 in June 2013, in that time I don't think Alex and I have ever faced or paired with each other. We've been on adjoining tables but with this our last chance to dance Alex twisted the strands of fate to put us both on the same table - Knight on Knight! I'm paired with Tom Capper again [paired with for DT3 and opposite for Never Mind the Blog Wars] he had his Blood Angels, Mephiston, possibly Astorath some Assault Terminators and Sanguinary Guard. Alex had his two Helverins and a Knight Warden and was partnered with Jonathan Lyness [regular attendee both at Alex's events and my own Birthday Bash] he had Nurgle and Death Guard - a Damon Prince, big blob of cultists, 2 Bloat Drones, unit of Plague Marines and I'm not sure what else. 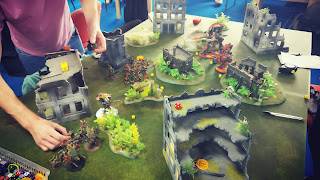 Once again the Knights hold the line but I have some Sanguinary Guard in the ruins with Mephiston. Opposite we have Death Guard and Bloat Drones on the left, a Helverin with the Cultists blocking out the centre, backed up by the Daemon Prince. The Warden is way back behind the ruins with the 2nd Helverin behind the abandoned Bastion.

We win first turn and keep the initiative. We surge forwards, Mephiston swooping over the cultists to get to the Prince but couldn't kill it. The Sanguinary Guard got into the Cultists while my Warglaives caught them in a pincer. I think they were wiped out this turn after morale. 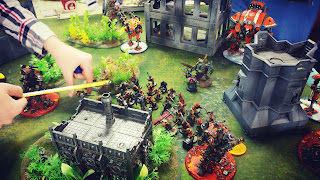 The Lancer went Flank Speed and crossed the entire board to get to the Helverin which couldn't withstand it's charge and was destroyed. It was a brutal first turn and I must confess I didn't feel too pleased with myself in the success of our Alpha Strike, given the spirit of the event. 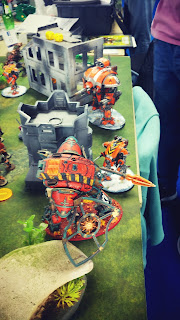 But Alex and Jonathan were not done yet - the Helverin and Drones repositioned to fire at the Warglaive but didn't do a huge amount of damage. 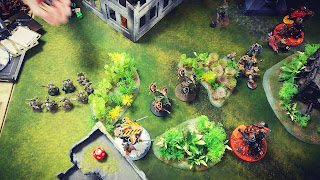 The Warden was significantly more successful, withdrawing from the Lancer while laying down plenty of wounds taking me to the second tier at least. The Bloat Drones charged the Warlgaive 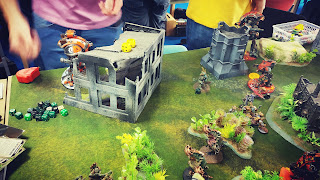 In our turn 2 the Sanguinary Guard look to have targeted the Helverin, it's down to 8 wounds. My second Warglaive slammed into a Drone. 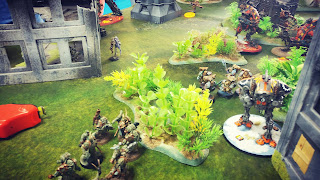 My Lancer headed for the Warden, but it's mobility was severely hampered by damage, only getting 2" on its 2D6 Flank Speed advance! Terminators arrived from deep strike.

And made their charge into the Plague Marines. That may have required a re-roll though which meant the Lancer was at risk making his on the Warden... 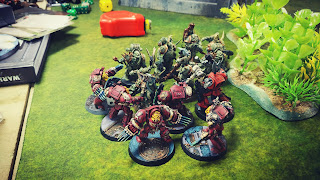 I'm not sure if he was killed in overwatch or Alex's next turn but we never found out what it would be like in close combat. I felt a little less guilty about that Alpha Strike at this point. 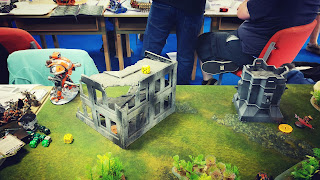 I've no idea what damage was made here but I think the Drones survived. 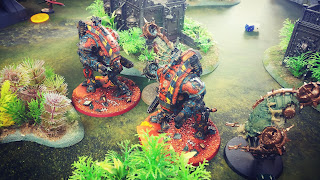 Then fell back to secure the objective in the ruins 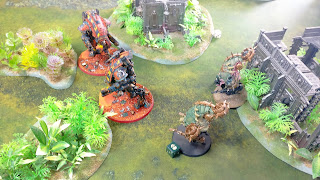 This allowed the Warglaives to move up. A Nurgle dude holding the objective in the corner of the ruins was killed somehow, allowing my Warglaive to secure it. The Terminators wiped out the Plague Marines with the help of Astorath. 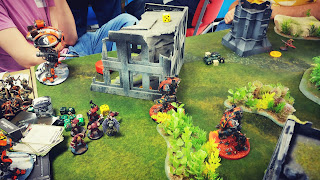 The Sanguinary Guard took the fight to the Drones, while the last Helverin doesn't feature in anymore pics so might have been destroyed at this point? 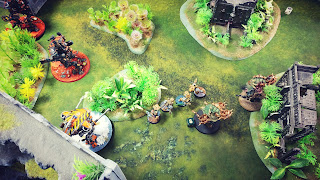 The Sanguinary Guard took casualties in overwatch but I think they killed one of the Drones. The Warden blew up both Warglaives and some of the Terminators. 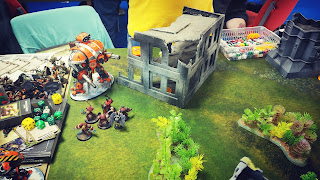 But was assaulted by the remains of the squad and Astorath. The last Drone fell back to hold the objective but the Sanguinary Guard was still there so it may have been contested.

Astorath was the lone survivor against the Warden, I'm not sure how much damage it had been dealt, not half I don't think. 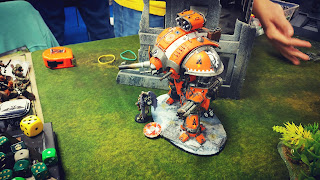 Fall back and retreat again, still no end to the deadlock. 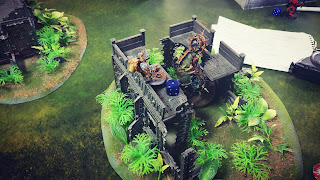 With honour at stake the Standard Bearer left the objective it had been holding to charge the Knight in an attempt to bring it past half points but he could not make the charge. 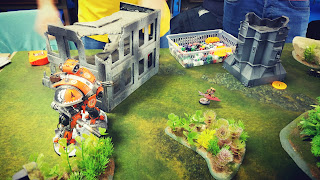 The Bloat Drone must have perished leaving the Sanguinary Guard to hold our objective again. They may have been killed in Alex's turn - he had enough firepower to do it! 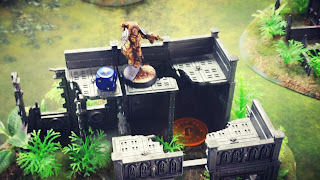 The final score was 7VPs to 6VPs in our favour at turn 5, which was the last turn. We'd scored 1169pts but been almost [if not completely] wiped out. I honestly don't remember much of what happened. It feels like quite a tactical game but like I say after our turn one I felt really bad but it would appear that a sacrifice of a unit of Cultists and a Helverin was a small price to lure in my Lancer and scalp it so early.

But another great game, regardless of the fact that my Lancer failed to survive a single match - so no honour badges to add :( It was a great way to finish the event off, nice to be picked by Alex and be with Jonathan and Tom again. That's the best part of these events as it's almost like a reunion each time. Hopefully someone will step forward to continue it on. Obviously I could 'put my money where my mouth is' and take up the baton but I think Alex has said someone has already offered. 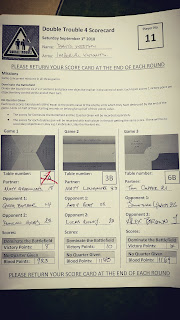 Here's my final scorecard, not that it matters. I honestly felt I had a pretty tough army this time, but clearly it was more fragile than I thought. Definitely the Lancer is far from OP, and I think over-costed too. 440pts seems like a better price to me, maybe it would be different in a full Knightly Household. Anyway, I've a wrap up post and painting comp to do but this is the last Double Trouble report - So Long and Thanks for All the Dice!