Here we go with the last Double Trouble ever. I'll cover my feelings in the wrap up but suffice to say the event was it's usual fun, tinged with a hint of sadness as it has come to a fitting end. First game and I'm partnered with Matt Greenwood [Alex's regular opponent] and his Astra Militarum [3 Leman Russ with Pask, a Psyker, some Ratling Snipers and Vets but with no Command Point farm!]. 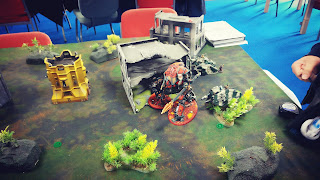 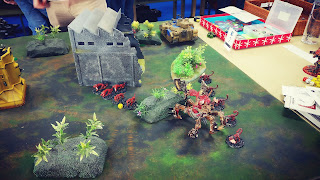 Setup was table ends but with the pointed ends 18" apart. That would have been beneficial for my Knights if only the apex wasn't right in those ruins. Regardless we paid 3 points straight off to put one of my Warglaives in reserve and outflank. We finished deploying first, won first turn and then Greg stole the Initiative. Greg and Duncan move up to secure objectives [which were scored each turn]. With my Cerastus in full view he took a pounding from the Baneblade, despite rotating the Ion Shields he took 7 wounds, down to 20. Greg and Duncan scored 4VPs this turn. The Cerastus Advanced but was nowhere near the Baneblade. The Warglaive followed along in support. Matt managed to takemost of the wounds off the Soul Grinder [down to 3 or 1?] he also dinged a Flesh Hound with Heavy Bolter fire. 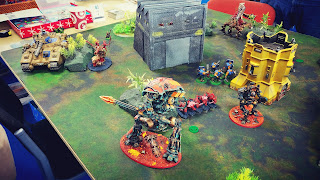 The Skull Cannon fell victim to concentrated fire from the Leman Russ and my Cerastus Shock Blast. With the Lancer exposed I decided to assual the Flesh Hounds [costing 2CPs to assault after advance] then used the Shock Lance. 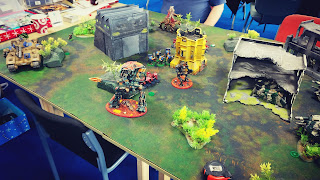 Only killing two but 'safely' remaining in combat, while the Warglaive attacked the Bullgryns killing one. We scored 2VPs of objectives and then the Daemon Prince and Bloodletters appeared in our midst!

You see the thing with being locked in combat so you then Fall Back and charge again is that your opponent can also Fall Back leaving you exposed and vulnerable! I'd somehow forgotten that and suddenly all the Baneblade's weaponry was traind on my Knight but was killed with just the main cannon! Another ignominious performance from the Lancer. 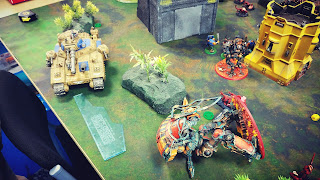 While the Bullgryns set to work on the Warglaive, clubbing it to bits until it blew up in their midst putting mortal wound on all those around it. The chaos Forces pushed forward, the Bloodletters making a huge charge to tie up Pask and another [or both the other] Leman Russ, luckily the Daemon Prince failed his charge and they scored another 4VPs. 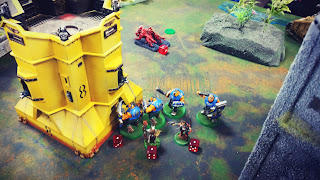 Things were starting to fall apart, but I had my last Warglaive arrive from reserve. I think our plan here was for it to try and help kill the Prince and Bloodletters, with the Veterans who appeared int he back field. This would free up the tanks to focus on the Baneblade. Unfortunately the the Veterans whiffed and he couldn't manage but take some wounds off the Prince. We scored another 2 VPs 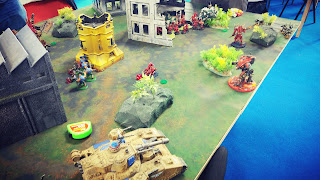 The Bloodletters took some heavy losses but were still positioned to keep the tanks locked and score our objectives. 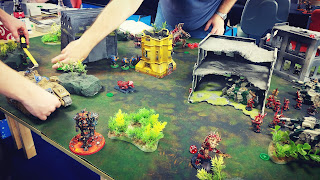 Meanwhile the Baneblade set to ram the Warglaive. 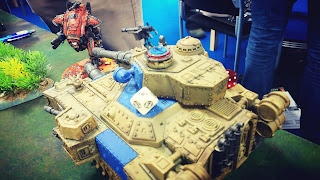 The Baneblade crushed the Warglaive under it's tracks, the Blood letters continued to distract the tanks in combat.

While their Prince assaulted the Veterans, killing them with ease. 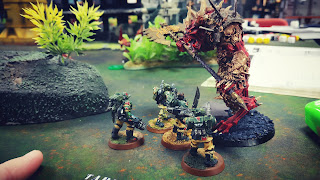 More Bloodletters died, but so did Pask as it was shot by the Baneblade having moved out of combat. 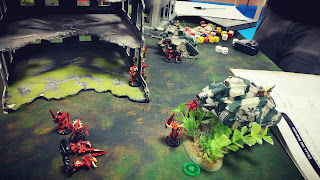 The Chaos forces added another 5 VPs to their tally. 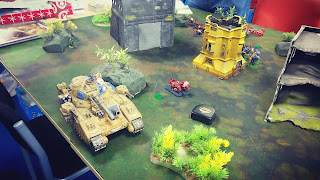 The Daemon Prince set his sights on the remaining Leman Russ and smashed it to pieces. 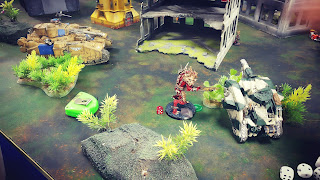 All that was left at this stage was Matt's psyker... 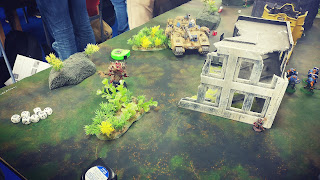 oh and an infantry squad in the ruins scoring us 1VP. I think they must have finally taken donw the Soul Grinder but the Psyker was not about to be bludgeoned by the Bullgryns. 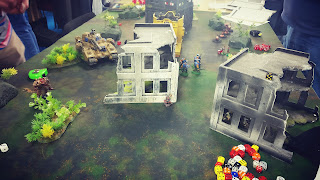 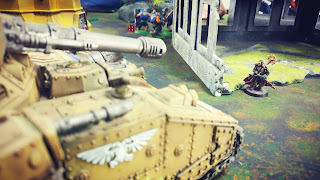 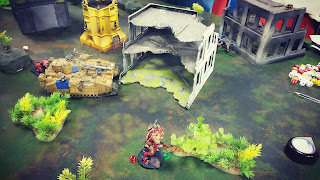 Another great game, the loss of the initiative had been unfortunate but the deployment  map didn't help. However, with fewer units deploying the Lancer out of sight of the Baneblade was never an option.

Everyone was super-cool to game with, so the result was once again broadly irrelevant, on to game 2.

If you're interested in any more of my Battle Reports, point your cogitators here: www.40kaddict.uk/p/battle-reports.html
Posted by 40kaddict at 12:07