This is quite an insightful little post about me I think. Recent posts [in particular the last one!] showed how I sensibly thought to use the delay in starting my Knights to crack on with the Dark Shroud but it's failing to ignite my passion to push on and get it done. I'm doing little bits, perhaps I might reach a tipping point? I also pointed out how the Primaris Marines are a bit 'big' for me and I'm on record as not a huge fan of painting power armour. Yet I find myself suddenly enthused at painting Steelhearts Champions from Shadespire!?

I'd managed to snag a copy of the game for just £27 on ebay, all models built [so no Big Build required 😃, but then no stamp either ☹️]. I'd been looking around on YouTube and found this basing tutorial from RobPaintsModels which is pretty cool and I thought I might get something more akin to what I'd hoped to achieve with the Fyreslayers [although I do still like what I did do]. So started with a black primer, then a grey prime on the base and a zenithal white spray on the models. Then I did a Valejo Stonewall Grey coat on the stones, adding some Citadel Skavenblight Dinge for darker more textured effect. This was then drybrushed white for definition [as per the tutorial]. I don;t normally drybrush, a bit of wetbrush perhaps but this was powder puff drybrushing which actually works on 'stone'. 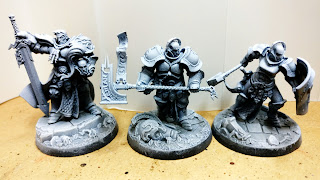 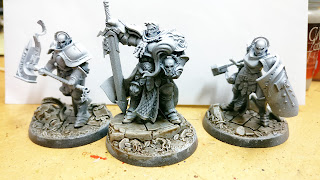 Next up is a mix of purple and green shades. I actually don't have a green shade, just a green glaze so in for a penny. And I've since discovered Drakenhof Nightshade is blue, NOT purple! 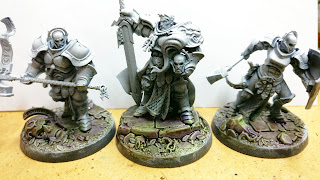 I'm thinking this is beginning to deviate a bit from Rob's tutorial now, doesn't seem to be as dark [that'll be because it's supposed to be blue and a green shade, not a glaze!] but I am pleased with the results so far and can't wait to crack on with the rest of it. 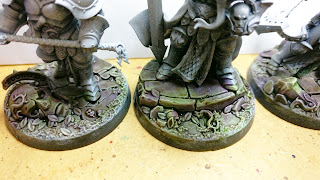 I think the key thing here is I have a plan, even if it's not following it perfectly I know what I'm doing next and decisions are being left to someone else [mostly]. To that end I'll be following Rob's tutorial on how to paint them, hence the white, although I'll probably be painting over it all anyway.
Posted by 40kaddict at 12:00