I continue to avoid painting my Dark Shroud and instead invest more time in Steelhearts Champions
following this basing tutorial from RobPaintsModels I stippled on the greens and yellow for the moss, again a little brighter than Rob's but c'est la vie. 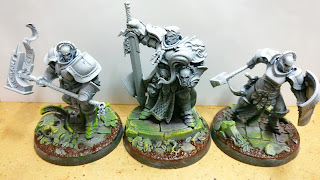 Rhinox Hide got added for the dirt and then a Stonewall Grey final drybrush just bleached a lot of vibrancy from it. In particular the purple and green washes seemed to have disappeared. 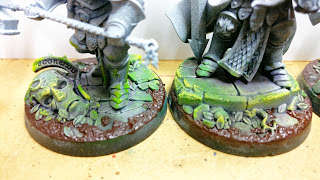 So I added some more purple, taking particular care to shade around the feet and underneath, not a shadow as such but that will help frame the models on the base. 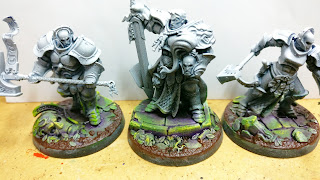 Leave, vines, shading and highlighting the soil and the purple areas. I also painted the armour Stonewall Grey - completely covering up all that lovely zenithal pre-shading. 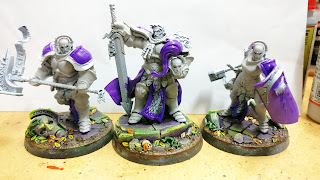 What I didn't realise was that thinning you paints meant tiny paint spatter flecks all over the bases! Bearing in mind I have spots all over my Red Planet BASES! you'd think I'd be down with tha but NO! I did a quick purple was over the top of it. They're not completely covered, you can still see some texture and it's even more purple but it's the best of a bad job. 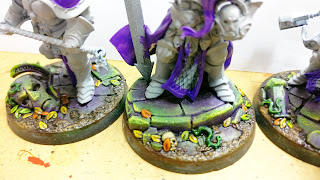 The purple elements are really bright and glossy because the paint is really cheap from a stationers. I'm confident washes and varnish will knock it back though. 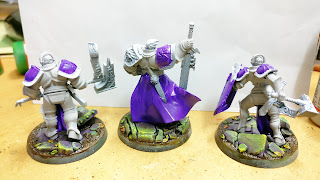 I keep referring to Rob's guide to painting the Champions but I'm also making my own changes. Metallics follow my own recipe - it's my signature now even if his way was easier, quicker and an opportunity to try something different... 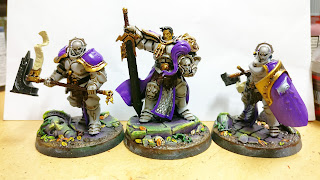 I had painted the helmet bronze too, but switched back to white as he was too gilded. Waepons are black, they'll be Obsidian blades as I like the idea it looks like they're carved out of the Flyreslayers! 😀 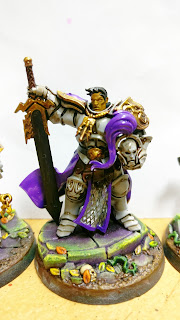 Some more highlights on the gold, then shade it back and highlight again. Pin shading has been done on the armour, so a tidy up with Stonewall Grey and then white.

Purples should be a lot fun too but that's something new, it already looks like it's tying the model into the base. It's almost like I planned it all this way!