Game 2 and I'm partnered with Matt Longmore again [I'd been paired with him at DT2 and he was my opponent in DT3]. He'd brought his Blood Angels with 'Captain Slam', some Veterans, Death Company, a squad of Helblasters and some other units [THSS Terminators] that would benefit from reserve deployment. We were up against Andy Peat and his Tyranids [5 Carnifex, Old One Eye, a Neurothrope and a Biovore] and Lucas Rooney and his Astra Miliarum [2 Leman Russ, 2 Basilisks, a small unit of Bulgryns, a 'Command Point Farm' and mortars. 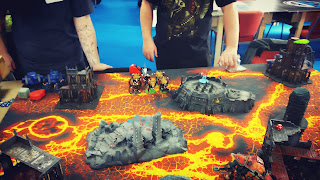 We managed to win first turn and not lose the initiative. Matt had kept all but a unit of Veterans in the ruins above my Lancer and the Helblasters on the top floor of the ruins at the top of the board. I deployed the Lancer in the centre with one Warglaive on the left and the other on the extreme right flank to go for the Basilisks. 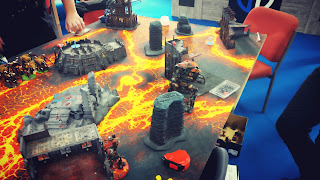 Turn 1 and the Lancer Flanks Speeds forwards, just 2" away from the Carnifex, this could be awesome or very foolish. The Warglaive couldn't quite match his pace, making it's normal move but putting 4 or 5 wounds on the Carnifex on the left. 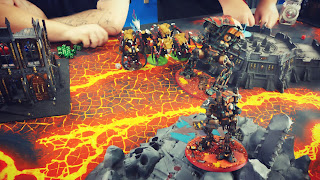 The other Warglaive was even more effective, melting one of the Basilisks into slag. 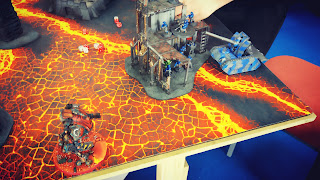 The Lancer smashed into the front rank of the Carnifex, killing all three in quick succession -now that was more like it! Using the full tilt stratagem earned our opponents some new CPs. We ended the turn on 1VP, for the veterans holding our centre objective. 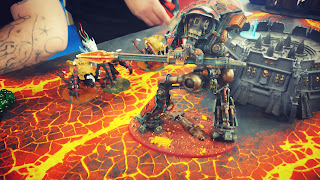 Lucas and Andy pounced on the Lancer, sending in Carnifex and Bulgryns but not before the Neurothrope did 6 Mortal Wounds. As the dust settled Old One Eye and his buddies and brought the Lancer to just 7 wounds - karma? They scored 2VPs for objectives this turn. 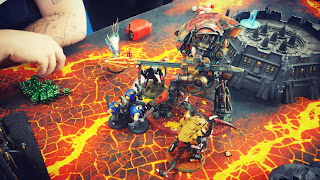 Turn 2 and the Warglaive moved on the final Basilisk. Death Company arrived just out of shot and Captain Slam and the Terminators were elsewhere on the board. 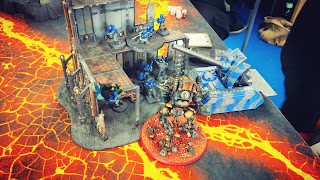 The second Warglaive joined the melee in the middle, he was down to 1 wound thanks to the Leman Russes. I had considered sending it back to the ruins int he centre to hold the objective and free up the vets but figured he could get in the mix now, while the Vets where still 2 turns of movement away from making an impact. Another unit of Vets jumped over the derelict Aquila Stronghold into combat with a Carnifex. The Lancer fell back and charged again killing Old One Eye either with Shock Blast or in combat.! 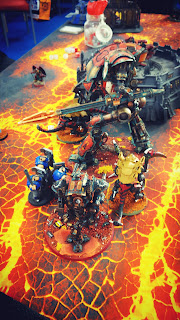 Captain Slam jumped into combat with the Neurothrope. 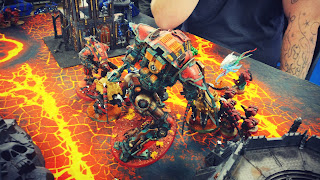 The remaining 2 Carnifex got killed but the Neurothrope survived. 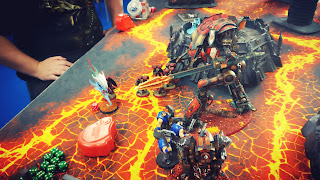 Warglaive killed the Biovore with its Meltagun and the remaining Basilisk. Veterans killed the Infantry Squad except their commander who escaped to the top of the building out of range of the objective. He would be killed by the Warglaive in the next turn. We finally had the sense to move the Helblasters down to hold the objective they'd mutely stared at turn 1. We scored 3VPs.

Not sure what Lucas and Andy did in their turn, killed some Terminators and take the Lancer down to 4 wounds. Rotating my Ion Shields helped but this gave them yet more CPs. Slam went in search of the Leman Russes. 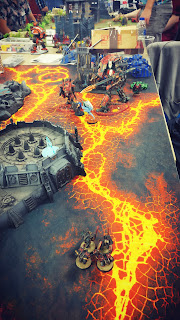 The Lancer fell back and charged again. Unfortunately I couldn't kill the Neurothrope - it was going to kill me next turn with Smite for sure. 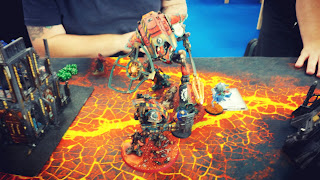 The Warglaive lost its final wound leaving this melee in its closing stages. 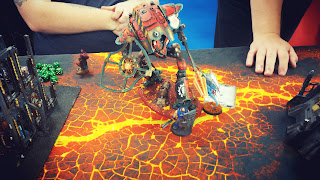 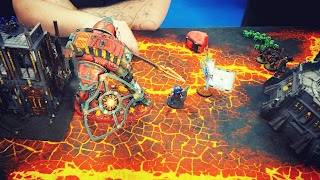 It was destroyed just as the Death Company arrived in Support, not sure if that Neurothrope is escaping or dead, think it's the former! The Bulgryn, nicknamed Champ survived, despite my best efforts to squish him! Anyway, final score 10VPs to us 5VPs to Lucas and Andy. We scored 1180 Blood Points 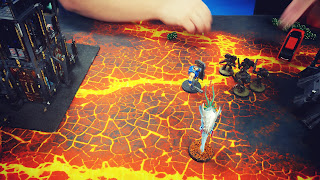 Another great game, snatching the win on VPs

One overwhelming topic of discussion throughout the game was the Astra Militarum CP farm. When you're recouping CPs from both us and their own stratagem spend Lucas must have had around 25 CPs throughout the game, he even had some left at the end! I agreed totally with him in that 'why wouldn't you take it but it's clear from BoLS that these shenanigans are a little beyond the pale.

And more recently at NOVA, the ubiquity of the CP farm has already prompted a suggestion it will be nerfed. I'm not forgetting that Tyranids can also farm, but it takes a Lictor or Genestealer to kill a character in combat, spend a CP and get D3 back. There are a lot of boxes to tick there that can still result in where you started. Perhaps Kurov's Aquila needs a price to pay to recoup before you roll? Hopefully Chapter Approved will help balance it, GW already increased the amount of CPs you get for a Battalion, farming on top seems a little over-powered.


If you're interested in any more of my Battle Reports, point your cogitators here: www.40kaddict.uk/p/battle-reports.html
Posted by 40kaddict at 12:10