The great thing about a weekend is I seem to get a lot more done. I think because I don't have work the next dayI may burn the candle a little bit more than I should, so next thing it's 1am before I drag myself to bed. At some point I need to get a handle on this, stop setting myself deadlines so I can be a little more relaxed about completing stuff, I've burned out a few times already I need to think marathon not sprint. 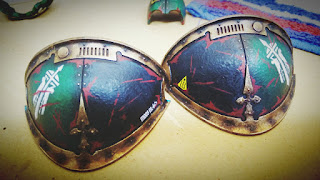 Anyway, the pauldrons got damaged. 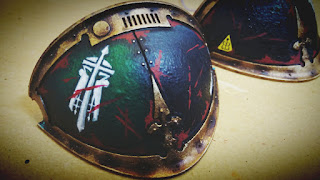 This was just Khorne Red all over I'm not sure if I did anything else that night. 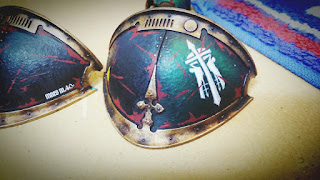 But the following night I did all the shadows and highlights. I think the neat touch here was streaking the white from the Euronymous symbol, it really helps sell the effect. 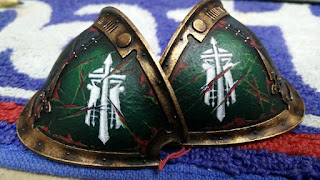 And the back of the pauldrons, a little more understated. I wanted to do something else to break up the surface, couldn't think of anything so left it. 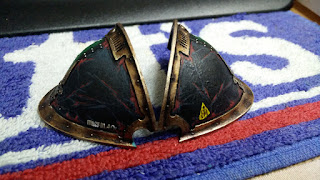 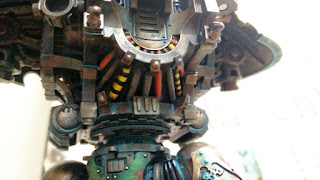 And all nice and covered up, why go to so much effort on something that won't ever be seen? Because I'll know it's there [as Durnik once said ;) ] 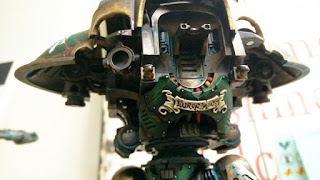 You know how I said I'd reduce the amount of damage on the carapace... it appears I don't know when to stop! This was another nights efforts and although I think I've done a better job in some places than the Cerastus damag,e I think I did too much and possibly too uniform in places. I mean the damage is pretty much consistent across the model I just think it appears 'considered' as opposed to random. It's great and all, I just think I could have been more restrained to let the green show through more. 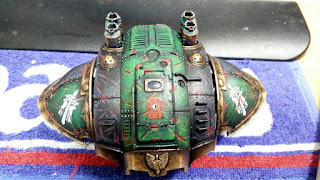 I did the damage on the guns too. 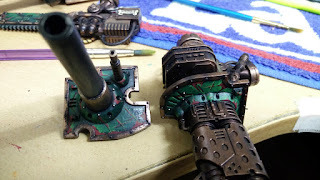 So, what's left to do:
And I think that's all there is to do. It's not a big list of remaining things but I can see it taking a disproportionate amount of time - four nights work to get to varnishing I think but we'll see. Regardless I'm well ahead of schedule on my AoP countdown.